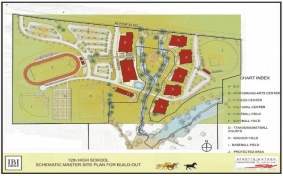 May 29, 2010 (Alpine) – Grossmont Union High School District will host a forum on Alpine’s planned new high school on Tuesday, June 8 at 6 p.m. in the Alpine Community Center, 1830 Alpine Boulevard in Alpine. Residents from throughout the Grossmont Union High School are welcome to attend. While boundaries for the new school’s attendance are still being finalized, parents from Alpine and Blossom Valley are particularly encouraged to participate in the forum.

The public will have opportunities to learn about new programs to provide state-of-the-art learning, architectural features for the school and grounds, curricular components including education technology, and weigh in on options for what to name the new high school.

The latter has been a point of contention. A naming committee appointed by GUHSD trustees includes a majority of conservative Republican office holders and party officials who initially voice enthusiasm to name the school after ex-president Ronald Reagan. But opposition has arisen from some prominent community members, including the Viejas Band of Kumeyaay Indians, who object to sending their children to a school named for Reagan, whose administration tried to dismantle the Bureau of Indian Affairs and slashed programs that negatively impacted health and jobs on reservations. Others have argued that the trustees should follow the District's existing rule, instead of seeking a waiver.  That rule requires that high schools be named for geographic regions, not people,  to avoid controversy and divisiveness in the community.

Starbucks and Albertsons will provide refreshments at the June 8 meeting on Election Day.