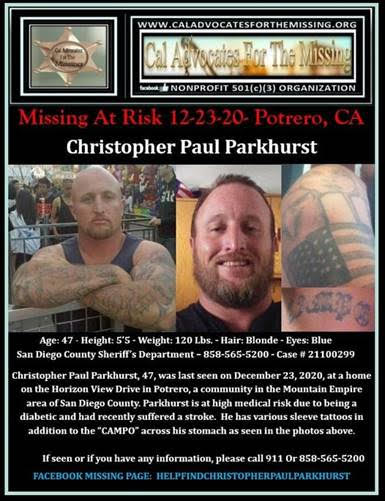 County News Service
January 24, 2021 (Potrero) – The San Diego Sheriff’s Department seeks public help to find Christopher Paul Parkhurst, who has been missing for over a month.  Parkhurst, 47, was last seen by an acquaintance in the 23000 block of Horizon View Drive in Potrero on December 23. His family has not seen or heard from him since then.  The famliy notified the Sheriff's Dept. January 3, according to the Sheriff's department.
"Deputies have conducted a limited search of the area for Parkhurst, but the terrain in the area is rugged and expansive," says Lt. Thomas Siever. "This morning, about 80 volunteers with Sheriff's Search and Rescue, Homicide detectives, and deputies assigned to the Campo Substation conducted an exhaustive search of a large area around Horizon View Drive. Parkhurst was not located and his whereabouts is still unknown."
Parkhurst is 5’5” tall, weighs 120 pounds and has blond hair and blue eyes.  He has sleeve tattoos and the word “Campo” tattooed on his stomach.According to a Facebook page, Help Find Christopher Paul Parkhurst, he is at medical risk due to recently having a stroke and being diabetic.