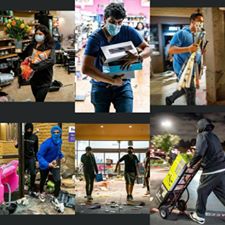 Scroll down for images of more crimes commited during the May 31 La Mesa riot, including arsonists not yet apprehended

June 12, 2020 (La Mesa) – La Mesa Police yesterday announced new arrests related to the May 30 riot in La Mesa, the latest for looting stores at Grossmont Center and the La Mesa Springs shopping center. Though the riots occurred in the aftermath of a Black Lives Matter protest over police use of force, those arrested so far include white, Hispanic and black suspects.

Rey Estrada-Silva, 25, of La Mesa, was first arrested last week on suspicion of looting Play It Again Sports in the La  Mesa Springs shopping center after tipsters recognized images of him on social media. He was released on bail, but since been arrested again and booked into County Jail on two counts of burglary during an emergency after evidence emerged that he also allegedly looted Target and Verizon stores at Grossmont Center.

Helen Tewolde, 26, of San Diego was arrested on June 10th on suspicion of looting Sally’s Beauty Supply in the  La Mesa Springs shopping center, where numerous businesses were looted, vandalized and a fire set in the Vons store.  Tewolde was aapprehended after an anonymous tipster recognized her on a video of looting appeared on social media. She was booked into the Las Colinas Women’s Detention Facility and charged with burglary during an emergency.

Rodku Smith, 20, of San DIego and Jamal Hussein, 24, of San Diego, both black males, were arrested May 31 at 5454 Grossmont Center Drive and charged with burglary during a state of emergency (looting) and rioting.

Javier Zavala, a Hispanic man from La Mesa, was arrested at Palm and Fresno initially for public drunkenness and later for allegedly attacking a woman with a metal baseball bat after the victim, whose identity was initially unknown, came foward.

Jason Buckley, 43, a black male adult,was arrested on May 31 at 8410 Center Drive in La Mesa and charged with being a felon in possession of a felon and ammunition which he was prohibited from owning.

Abdirashid Nour, 22, a black male adult, of San Diego was arrested at 4700 Palm Ave. in La Mesa at 3:15 May 31 for refusing to leave the scene of a riot after an emergency curfew.

Kali Jonquet, 24, a white female from San Diego, was arrested for rioting and resisting arrest.

Zachary Karas, 28, a black male adult, was arrested along with Jonquet. He is charged with posession of arson materials and a detructive device after being found in posession of Molotov cocktails (bottle bombs) and fireworks May 31 at Spring St. and Allison St.

There are many photos and videos published on social media and in other media outlets of suspects not yet identified.  For example, NBC 7 aired security footage of Pierre's Jewelry store in downtown La Mesa showing a large group of people breaking down a security door and then looting the premises:  https://www.nbcsandiego.com/videos/whats-up-updates-in-san-diego-for-morning-of-june-12-2020/2345970/

Chilling videos on social media taken by Bryant Tuck show many arsonists joining in the burning down of the Randall Lamb building, who remain at large.  If you recognize any of these people, please contact the FBI:

Below are four screen shots of some of the arsonists: 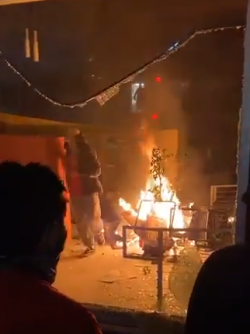 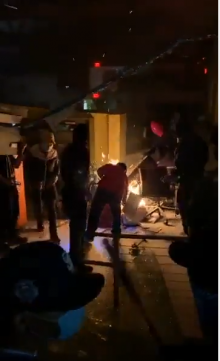 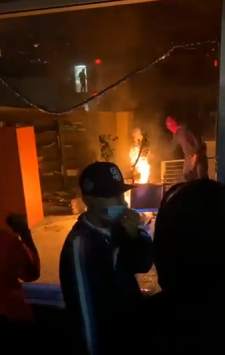 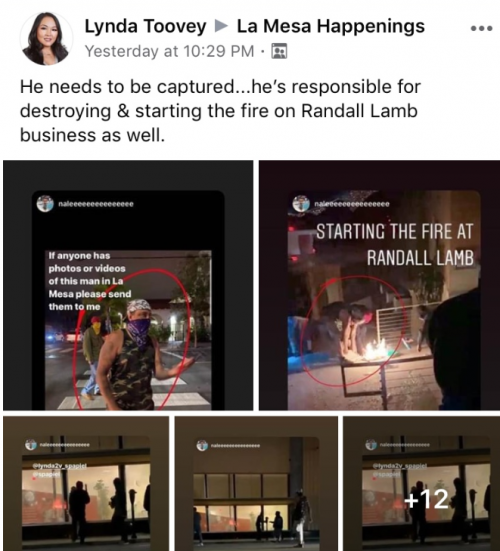