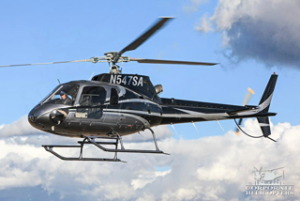 This week, we have received complaints from residents in Jamul, Lawson Valley and Deerhorn Valley.  Residents have not yet been able to confirm who owns the helicopter, which is dark in color and has the identification “N547SA” at the top, as a photo provided by a resident indicates.

Jacob Huggins told the Deerhorn Valley Antler editor that he saw the helicopter several days ago over Beaver Hollow near the intersection of Lawson Valley and Skyline.  “It was a little odd because he flew directly at us on the hill at almost eye level (we weren’t sure if he was going to stop!) and then veered sharply, “ he wrote.

Antler editor Kim Hamilton wrote on September 10th that a noise helicopter had been circling, hovering and otherwise visiting parts of Deerhorn Valley.  “The noise is enough to startle livestock and send dogs inside,” she said, adding that the helicopter appeared to be doing surveying or aerial photography.

Hamilton confirmed to ECM that the property lines where the helicopter was seen abut Cleveland National Forest, where SDG&E has been doing surveying of its lines.

ECM contacted SDG&E to inquire if they chartered this helicopter. A spokesperson at SDG&E said she would look into the matter.

“I just had a meeting with the Sunrise Powerlink mitigation folks and SDG&E was there and made no mention of any helicopter activity,” Captain Schreiner wrote in an e-mail forwarded to ECM by a resident.

Hamilton later traced the copter to Shier Aviation Corp, whose website is www.CorporateHelicopters.com .  Her research indicates the chopper is likely a Eurocopter AS350 B2 Astar model, which Shier Aviation has four of in its fleet.

On a community forum site for Deerhorn Valley, residents posted additional comments.  Hannah Gbeh wrote that the chopper appeared to be “hovering over the Sunrise transmission lines and power station.”

Other residents griped about increasing helicopter noise due to ramped up Border Patrol operations and Sheriff’s activity, as well as Life Flight medical helicopters.

Suzy Bullock initially thought the helicopter might have been a military copter used by Border Patrol. “There should be some way citizens can find out what is going on. It was frightening,” she wrote.

Citizens in Boulevard asked SDG&E for notification of future flights, but the utility has declined their request citing weather uncertainties and other factors.

Vicki Banning later posted that the Sheriff’s department had informed her that there were two helicopters in the vicinity –and that both were indeed contracted by SDG&E.

The confusing scenario points up the need for better notification of communities, as well as a clear way for residents with questions to find out who is flying over their properties and why.

Shier isn't unknown, he has been around forever. He used to work out of Gillespie Field, not sure if he still does. I would never do business with him.
It's a Aerospatiale helicopter, operated by Shier Aviation Corp. DBA, etc. An unknown entity. http://flightaware.com/resources/registration/N547SA