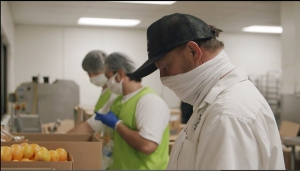 Moser said after the meals are prepared by the Sheriff’s Department and transported to Lucky Duck Foundation distribution sites in Miramar and Chula Vista. Volunteers at those sites sort and organize the meals for more than 30 outreach teams from 25 different social service agencies that blanket the county to deliver the meals to people living on the streets.
“The objective is two-fold,” said Moser. “It provides nourishment and equips outreach workers with an important tool for building trust and rapport to help the homeless end their homelessness by connecting them to available resources.”
Moser said the program also employs formerly homeless individuals, one of whom serves as a distribution site coordinator.