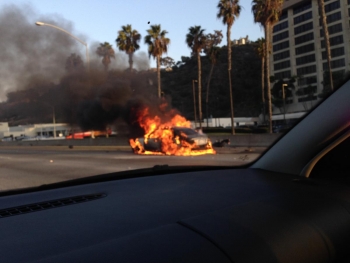 January 9, 2014 (San Diego) Updated January 10, 2014 – A motorcyclist who witnesses reported was speeding at up to 100 miles per hour and weaving across lanes struck a Hyundai sedan on I-8 eastbound west of Texas Street in Mission Valley around 4 p.m. today.  Both vehicles burst into flames.

Passerbys stopped and tried to douse flames with a fire extinguisher, also performing CPR on the motorcyclist, 22, from San Diego before firefighters and paramedics arrived, but he was declared dead at the scene.  He was driving a dark 2008 sport-type Suzuki motorcycle, according to CHP.

All lanes were blocked and a SIG alert was issued, though by early evening only the righthand lane remained blocked.