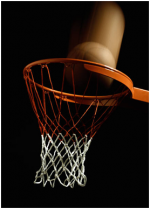 January 14, 2014 (Spring Valley)-- As  a sports enthusiast or just looking for great entertainment, look no further than the Lady Matadors of Mount Miguel High School(1-3-14) . This fully equipped group of ballers are led by the talented trio of Dejanay Pope, Deijah Blanks, and Zaria Branch.

Dejanay Pope is a native of Spring Valley and has been playing the game of basketball since she was 10 years of age. Pope has been referred to as, “My go-to girl, and the one who puts forth 100 percent effort at all times.” stated Matadors coach Robbie Sandoval.  “Pope plays with so much intensity that sometimes it is hard to even get her off the floor.” Pope is a senior this year, and captain of the squad. Pope stands at 5’9” and primarily plays forward and is the leading rebounder. She is averaging about 12 points a game as well. In the classroom Pope is also a success as she currently has a 3.3 grade point average. When asked what her ultimate goal is for the season, she stated confidently, “I think we can go to the state playoffs and win.”

Deijah Blanks has been referred to by Sandoval as one of the two leading offensive scorers on the court. Blanks grew up in North Park, an inner part of San Diego County. She has been dazzling crowds with her dribbling and spectacular shooting capability since she was nine years of age. Blanks is a 6-foot forward and is also a team captain. Blanks also a senior, is scoring an average of nine points a game. In the classroom this young lady is all business as well, sporting an impressive 3.6 grade point average. She is also very optimistic that her goal to win stats is very achievable. When questioned about what schools she is looking at and who is scouting her, she stated quietly, “My coach is looking at all the schools on my behalf.” Blanks does, however, know that she wants to major in sports medicine or sports therapy. After a short stint at Scripps Ranch, Blanks chose to come to Mount Miguel mainly based on the reputation of the great athletic program, primarily basketball.

Zaria Branch has grown up her whole life in San Diego County, and has been fine-tuning her basketball skills since she was 11 years of age. Kobe Bryant of the Los Angeles Lakers is one of her role models. Clearly she stated, “I love Kobe.” Branch is the second of the two leading offensive scorers. Branch stands at 5’10” and is the Lady Matadors leading scorer, averaging an astounding 34 points per game. When asked about the competition, Branch referenced the loss to Bishop’s earlier in the season.

“Bishop’s is the only school that really gave us a tough time,” said Branch. She continued, “We just made too many defensive mistakes and turned over the ball too much.”  Just as her teammates, Branch has accomplished a 3.86 grade point average.

The Lady Matadors are currently 12 wins and 2 losses into the season, and have yet to start league play. They have scored 912 points thus far, and will certainly create a most points scored record in Lady Matador history. “To win league should not be that tough,” stated Sandoval. “We just need to limit our turnovers, and we will not lose.” Clearly the Matadors are among the best in the county, and will host Mission Hills for the second time this year at 4 p.m., January 11th. In the last meeting the Lady Matadors destroyed Mission Hills 57-33. The Matadors should have a similar result this time.

“We are also very fortunate to have the support of such a great athletic director and principal,” stated Sandoval. “It is also that we as coaches also hold our students and players accountable, and prepare them for life lessons.”

Look for Mount Miguel to be in the state finals without a doubt.