Former Mountain Empire teacher:  `Misspent or reshuffled' monies should go back to the classroom 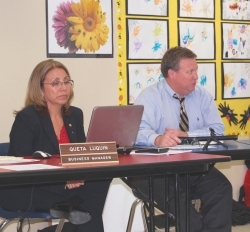 October 27, 2010 (San Diego’s East County) --In the wake of East County Magazine’s story about the abrupt reshuffling of principals at two elementary schools, new questions have risen about site management and the handling of special funds in Mountain Empire Unified School District.

These include questions about the District’s handling of “categoricals” -- special funds from state and federal education departments that benefit non-English-speaking and low-income students and reduction of classroom support for those students.

Former MEUSD teacher Sue Sherbondy and several current employees who asked not to be identified also question the District’s large number of administrative staff, allegedly more than the number allowed by the state.

Changes in the District

A certain amount of confusion may be justified among staff and families in the District, as MEUSD has undergone some drastic changes in recent years. Offerings through the District’s Regional Occupational Program (ROP) have dwindled and adults are no longer offered access to its classes. Bilingual and low-income staff previously funded by categoricals earmarked for materials and support staff for those populations have been removed from classrooms. They are now working in the District’s grant-funded after school program.

Also gone is the regular afternoon bus service at Clover Flat, Potrero and Jacumba elementary schools. Students of those schools must wait for a later bus funded by the after school program, giving students without other transportation no choice about participating in the program. Alternatively, “They can be driven home by their parents or walk,” Van Zant said.

The District’s junior high has been disbanded and its students distributed among the District’s six elementary school sites. The school was in its fifth year of program improvement scrutiny by the state.

The District is currently in program improvement, meaning, “Some students are not performing academically as the state expects them to,” Van Zant said. Until it was disbanded, the junior high was one of these. Currently, the schools under scrutiny are Potrero Elementary and the Mountain Empire High School. “That’s where we need to put our efforts,” Van Zant said.

The District has also taken to adopting charter schools in other Districts to generate extra income, and despite the superintendent’s stated intention to reduce costs, employs at least three more people -- one of them a $107,000-a-year administrator -- to manage that project. Van Zant said he believes the charter schools will generate $420,000 to $450,000 in this fiscal year.

The District’s business management – a one- or two-person job for most of Mountain Empire’s history – is now done by five people: a business manager, two accounting technicians, a payroll coordinator and a director of finance, according to the District’s salary schedule.

Because Clover Flat, Jacumba, Pine Valley and Descanso elementary schools are all managed by one traveling principal, each site now has what is called a teaching assistant principal -- teachers who are given stipends to provide on-site services to students – but even the teacher’s union is unable to learn what percentage of their daily work is considered administrative time, according to a District employee.

As low income and bilingual teaching support has dwindled, the Spanish-speaking student population has exploded at both Potrero Elementary and the high school. Residence fraud by residents of Mexico is believed by many to be the reason.

According to Van Zant, Spanish speakers now make up 25 percent of the District’s student body, but he denies that residence-checking standards have slipped: “We check like you can’t believe,” he said, adding that he has gone on home visits himself.

“We do home visits if the paperwork doesn’t look right,” he said.

The District was the subject of scrutiny by the state for its pre-1993 practice of allowing hundreds of trans-border students to attend school in the District and was fined $300,000 as partial repayment for millions in illegally collected state funding for those students.

School site budgeting of categorical monies, previously the task of site-based councils of principals, staff and parents, is now done at the District office, leaving parents and staff at the schools to wonder where the money to fund low-income and bilingual support is being used.

“The District is carrying a reserve of approximately 19 percent, according to budget figures (and) it is only required by the state to have 3 percent,” Sherbondy said. “It seems to me that this money, along with possible misspent or reshuffled grant monies, should be funneled into programs and go to the kids, where it is supposed to go.”

Luquin did not respond to specific questions about how the ROP, Title I and bilingual monies are being spent, nor what programs benefit from them. Asked via both phone and email, Van Zant also did not answer those questions.

Van Zant lauds the District’s large reserve and says the expenditure on managers is justified. He said that the District does not treat the assistant principals as administrators in its reporting, adding that he thinks the District total is eight administrators, not counting the charter school director. This estimate was given prior to the District’s recent hiring of a new principal, Bryan Farmer, who took the reins last week at Campo Elementary.

“The California Education Code, section 41402, states that a unified school District of 100 certificated staff is allowed a maximum of eight administrators,” Sherbondy said. “Mountain Empire is close to 100 staff members but has over 13 working administrators, according to the current salary schedule presented by the District.”

According to Arlene Matsuura at the California Department of Education Fiscal Services, the truth lies somewhere in between. Some administrative areas are exempt from the limitation and others are left up to the school District to determine. In general, people with education credentials are considered District administrators under this law, Matsuuma said. This would exempt the business staff, the transportation director and, possibly, the charter school director.

Administrative time contributed by teaching assistant principals would determine how many administrators they add up to, Matsuuma said. None would be considered full time administrators, but rather, each would be a fraction of an administrator. Principals and education program directors do count, although, “If any of those positions are federally funded, they are exempt.”

School Districts themselves are tasked with reporting on their administrative ratios, Matsuuma said. The information is checked annually by an independent auditor hired by the District. If the auditor finds a problem, he or she will explain the nature of the violation in a report to the state and the District is penalized a portion of its state funding.

The next meeting of the MEUSD Board of Trustees is 6 p.m., Wednesday, Nov. 10, at Campo Elementary.

Read prior coverage of the MEUSD charter school program at http://eastcountymagazine.org/node/3932

Read last month’s coverage of the abrupt change of principals at http://eastcountymagazine.org/node/4300