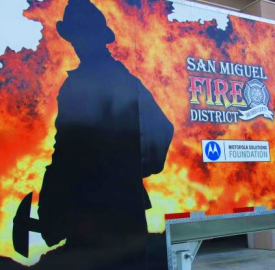 Updated October 22, 2014 - CAL FIRE Chief Tony Meacham, head of the County Fire Authority, has written to dispute statements made by two candidates in this race, which he says are "factually false."  You can read details of the Chief's statements here.

October 18, 2014 (San Diego)--In 2012, the San Miguel Fire Board voted for CAL FIRE to take over firefighting operations. The board voted unanimously for the five-year contract because the agency was deep in a hole economically and had already closed a fire station. Those in favor argued that this decision would allow the board to continue operations, recover financially, reopen the closed station and keep service at comparable levels. But critics including at least one challenger running for the board have sharply criticized the deal with Cal-Fire,  citing loss of local control and potential delays in response times, also faulting other board actions.

East County Magazine e-mailed questions to all candidates, including inquiries about the CAL FIRE arrangement and a letter the district received from the State Comptroller raising questions over the board’s finances.

The six candidates include two incumbents (Chris Winter and Rick Augustine) seeking reelection and four challengers. Three of the challengers are running together as a slate (Theresa McKenna, Jim Ek, and Mike Vacio). The other challenger is Cindy Croucher. Bios for incumbents Winter and Augustine are available on the San Miguel Fire district website.

Three candidates, challengers Theresa McKenna and Jim Ek, along with incumbent Chris Winter, have responded.  Below are the questions, and their answers, posted in full in the order received.