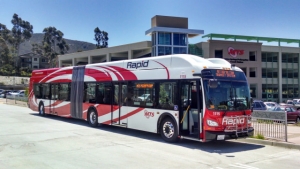 By Chris Jennewein , originally published in Times of San Diego 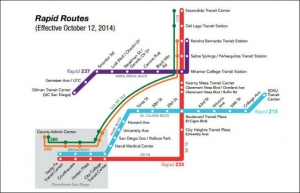 The new service, Rapid 215, will provide all day, every day service at a 10-minute frequency during the peak periods. It will be faster than regular buses because of transit signal priority, transit-only lanes, and custom-designed stations.

Rapid 215 is part of a growing network of high-frequency, limited-stop services that SANDAG, the county’s regional planning agency, is building in partnership with the Metropolitan Transit System and other local agencies.

Dedicated lanes built in the center median of Park Boulevard between University Avenue and El Cajon Boulevard are the first in the City of San Diego. Other improvements include new curb ramps, sidewalks, next vehicle arrival signs, and curb pop-outs that allow transit vehicles to easily merge back into traffic.

San Diego Mayor Kevin Faulconer is scheduled to cut a ribbon in front of a new station Thursday afternoon. Service will begin Sunday with free rides all day.

A growing number of cities are investing in bus rapid transit systems which utilize special lanes and other technology to speed service.