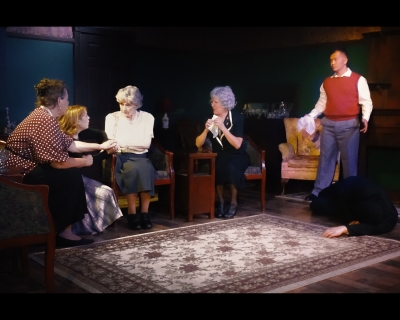 August 2, 2022 (Poway) - Not as well-known as perhaps some of Agatha Christie's other novels but often considered one of her best, "A Murder is Announced" is presented by Powpac now through August 21.  Novels  featuring detective Hercule Poirot are generally the Christie stories one thinks of first, such as "Murder on The Orient Express” and "Death on the Nile." I actually love sweet-little-old Miss Marple, the sleuth in "A Murder is Announced," which was written in 1950. The mystery, filled with twists and turns, will keep you guessing until the end.

The action takes place in a drawing room in an early Victorian house known as Little Paddock in Chipping Cleghorn. On Friday the 13th, the play starts off by introducing the characters. When Bunny reads in the paper an announcement of a murder to occur at Little Paddock at 6:30 p.m., the wheels are set in motion. Bunny, a disoriented older woman, is visibly upset. The homeowner, Letty, talks her down. Others are a bit on edge, but write it off as a joke while awaiting the appointed time. The murder does occur on time and we are left to figure out this brilliant who done it.

A show like this relies on characters. First, we have Julia Simmons, played by Audrey Linton, a sort of snobbish young woman, sister of Patrick. Patrick is played by Mike Li. Julia and Patrick are Letty’s Niece and nephew. Patrick is the never-do-well type. Letty is played by M. Eliane Weidauer, a kind of house mother taking everyone in hand like her little ducks. A veteran in all aspects of the stage for over 35 years, she commands the lead role expertly. Julia Clemmons, another veteran, plays Bunny. She is a childhood friend to Letty, now staying at the house--a true delight.

My favorite character was Mitrzi, the fugitive from an unnamed country and maid at Liddle Paddock. She was fabulous-- a stand out talent, played by :Linda Englund. Loveable Miss Marple is played by Brenda Robinson. Phillipa, a reticent young single mother, living at the house, is portrayed by Morgan Miller. Mrs. Sweetham is an inquisitive neighbor played by Sharon Kloosterman. Her son Edmund, a writer, is played by Richard Cajka. Inspector Craddock is played by David Dartt, the ultimate deducer. Eddie Rios plays both Rudi Scherz and Sergeant Mellons.

This play has all the unusual multi-suspects found in a classic suspense, inviting us to solve the crime.

The set is a wonderful, cozy, comfortable, somewhat cluttered English drawing room. What appears as clutter to some works nicely. It's the charm. Another character, to enjoy, maybe even distract, as we immerse ourselves in the story.

If you enjoy solving a good mystery, in person as a fly on the wall, this is perfect. Be an armchair detective to solve “A Murder is Announced” with a loved one. Discuss your theories with others at intermission. This performance is a must-see production. Bring some joy into your life.

A Murder is Announced