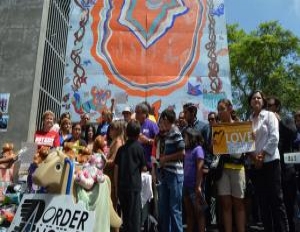 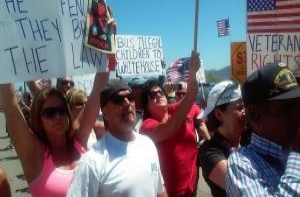 Updates on Murrietta, Congressman Juan Vargas' visit with immigrants in El Centro, and our interviews from this rally, including Enrique Morones of Border Angels. Rev. Beth Johnson from the Palomar Unitarian Universalist congregation and Everard Meade, Trans-Border Institute at USD, providing historical background on the Central American situation. 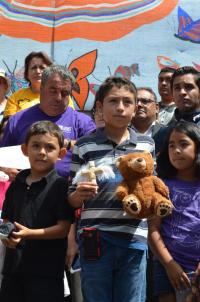 “What we need is humanitarian solutions. Sending the children back to sure death is not humanitarian.” – Enrique Morones, Border Angels

“This is a failure to enforce federal law at the federal level.” Murrieta Mayor Alan Long

July 2, 2014 (San Diego)—Yesterday, dozens of anti-immigrant protesters blocked buses carrying 140 immigrants from Central America, mostly women and children. Shouting racial slurs and carrying signs demanding the migrants be sent home, the protesters forced the buses bound for Murrieta to turn around and go to San Ysidro instead.  The buses carried migrants from Texas, where holding cells are over flowing due to a massive influx of families and children.

Today, Border Angels held a rally in support of the immigrants and began a donation drive for toys, clothing, diapers to welcome the immigrants, most of whom were fleeing violence and threats of death in their homeland.

But what’s fueling the surge in immigration from Central America?  To understand what’s happening today, we have to look back several decades into the history of the region and the role of U.S. foreign policy in Central America.