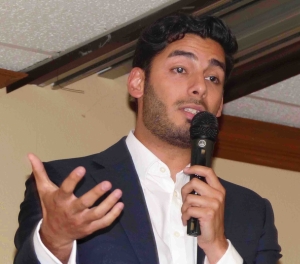 “This campaign is about solving economic injustice, regardless of your views or hues. Regardless of whether you’re a Republican or a Democrat, pain is pain.”—Ammar Campa-Najjar

May  29, 2017 (San Diego’s East County) – Earlier this month, we sat down for an in-depth interview with Ammar Campa-Najjar, a Democrat running for the 50th Congressional  district seat held by Republican Duncan Hunter.  (Hear the full interview, which aired on KNSJ radio, by clicking the audio link and scroll down for highlights.)

He has a rare combination of qualifications, with  background in helping promote job creation both as public affairs officer for the Labor Department under President Obama and as director of communications for the U.S. Hispanic Chamber of Commerce.

A native San Diegan of Hispanic and Arab descent, he’s also  the son of immigrants and a Christian who’s worked with his church to help working people and  deported veterans.   Now he says he’s running to listen to the problems faced by all people in the district,  use his experience in Washington to bring good-paying jobs to East County including rural areas, and bring “national pride, not national shame” as our region’s representative in Congress.