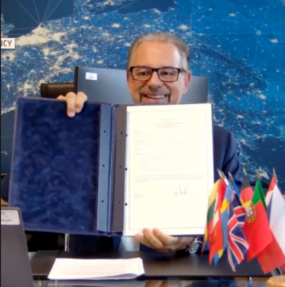 July 21, 2021 (San Diego) — Recognizing that climate change is an urgent global challenge, the National Aeronautics and Space Administration (NASA) announced a strategic partnership with the European Space Agency (ESA) to observe Earth and its changing environment. In a statement, NASA says, "Together we are leading and supporting a global response, with combined efforts in Earth science."

Climate adaptation and mitigation efforts cannot succeed without climate observations and research, according to the agency.

An email from NASA states, "We have more than two dozen satellites and instruments observing how the planet is changing and measuring key climate indicators, such as the height of oceans and inland waters, clouds and precipitation, and carbon dioxide."

The partnership was formalized through a joint statement of intent, signed (July 13), which outlines how the agencies will collaborate to ensure continuity of Earth observations; advance understanding of the Earth System, climate change and application of that knowledge; and collaborate on an open data policy that promotes open sharing of data, information, and knowledge within the scientific community and the wider public.

“Together, NASA and ESA provide most of the world’s Earth science coverage through our Earth-observing satellites,” said Thomas Zurbuchen, NASA associate administrator for science. “This transformative agreement will build on that capability, forging a critical international climate science partnership to tackle the most challenging climate questions in an integrated and strategic way. Not only will NASA and ESA work together to deliver unparalleled Earth science observations, research, and applications, but all of our findings will also be free and open for the benefit of the entire world as we work together to combat and mitigate climate change.”

Climate change is addressed, at great cost, in California's Fiscal Year 2021-22 budget. It includes $1 billion over several years for wildfire prevention, $3 billion to alleviate drought and $3.7 billion over three years to mitigate dangers posed by climate change — but Newsom and legislative leaders are still figuring out how to spend the funds, as of a CalMatters article dated late June.

Locally, the County of San Diego is hosting an online Climate Action Plan (CAP) update and development workshop on July 28, 2021, at 6 p.m. This meeting will provide an overview of CAP project components and will act as a foundation for developing vision statements of an equitable, net-zero carbon emissions future as it relates to energy, water, and waste emissions reduction sectors, according to the County.

Input on San Diego County's CAP will be solicited through a series of interactive poll questions and a discussion forum. Feedback will be used to inform the preparation of the vision statements.

Alternatively, here are some out of this world photos from NASA.