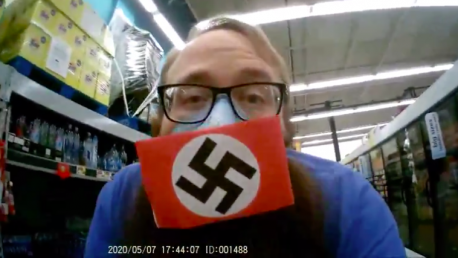 Photo:  A screen shot of “ubeartron” video of Dustin Hart at Santee Food 4 Less includes a BitChute ID of “1488,” references to Hitler or neo-Nazi views. He says he just Googled the Nazi flag and printed it out. His body camera “came from Amazon.”

May 27, 2020 (Santee) - Dustin Levi Hart says he and his wife wore small swastikas on their faces for almost an hour while shopping May 7 at Food 4 Less in Santee. It was a protest against state lockdown orders, he said.