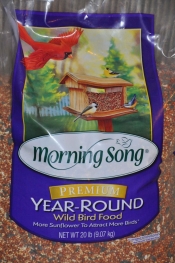 January 31, 2010 (San Diego’s East County) – Milt and Laura Cyphert of Lakeside suspect that Morning Song Wild Bird Seed, which they purchased at an El Cajon Wal-Mart last month, is linked to the sudden death of nearly 100 birds in their outside aviary. Only eight birds survived. Dozens of field mice that ate the seed also died suddenly, they report.  The manufacturer has previously faced other product recalls and disciplinary actions from federal regulators.

Morning Song previously recalled numerous bird suet products in 2007 due to salmonella contamination from peanut products, though wild bird seed was not among the products recalled: http://www.scotts.com/smg/products/morning_song/pdf/MorningSongRecall.pdf . Recalled products were linked to bird deaths: http://deadbird.wordpress.com/2008/06/03/scotts-bird-food-morning-song-k....

Numerous additional  recalls of this manufatucturer's feed products, including Morning Song wild bird seed, were made by the FDA in 2008 due to pesticide contamination: http://www.fda.gov/Safety/Recalls/EnforcementReports/2008/ucm120508.htm.

Morning Song’s manufacturer, The Scotts Miracle-Gro Company, its affiliates and retailers, also faced enforcement actions by the U.S. Environmental Protection Agency in 2008 for illegally producing and selling a variety of unregistered or unlabeled pesticide products:http://www.epa.gov/reg5rcra/ptb/news/

Laura Cyphert said the deaths were "gruesome" and that the bodies looked "sunken," not like normal daed birds.

The Cypherts are prominent community leaders as co-founders of the East County Community Action Coalition, which represents groups with over 79,000 members supporting legal battles against Sunrise Powerlink.  Milt Cyphert was also recently elected chair of a citizens' oversight committee for the Lakeside Fire Board.

Initially, the Cypherts suspected another cause for the sudden death of their birds and contacted County authorities. But after feeding the seed to field mice trapped for relocation, then discovering all mice dead within 12 hours of eating the seed, they made the connection.

A County vector control officer informed the Cypherts that there are no diseases that would have produced such rapid deadly results or that are transferrable between rodents and birds, they said.  The County official advised that it appears the seed is contaminated, the Cypherts said in an e-mail sent to East County Magazine on Friday. Wal-Mart asked that the seed be returned, however the Cypherts intend to seek independent testing of the product.

A manager of the Wal-Mart store on Las Coches Road in El Cajon, where the 20-pound bag of seed was purchased, advised that Wal-Mart does not remove products unless a recall has been ordered, according to the Cypherts.  But that process can take time.

The manager was not on duty today.  So East County Magazine spoke with Joel Olivas, assistant manager of the store, this morning. “What I can do is call the supplier,” he said.

Asked if Wal-Mart plans to be proactive by notifying government regulatory authorities and/or removing products from shelves of this store and others, Olivas said he would also contact Wal-Mart’s corporate offices.

ECM called Wal-Mart ‘s media relations office in Bentonville, Arkansas and left a message on a recording. We also sent an e-mail requesting attention to this matter.

If you have used Morning Song wild bird seed products or other bird feed manufactured by Scott and have observed deaths of birds or animals, please contact editor@eastcountymagazine.org and notify
http://www.fda.gov/Safety/ReportaProblem/ConsumerComplaintCoordinators/d....
Also please post comments below to inform our readers.

Over the weekend we have not been able to reach regulatory agencies but due to the eminent potential deadly threat to local wildlife, we are opting to publish this information immediately. We will publish any responses from Wal-Mart and/or regulatory agencies once received.

A variety of information is available online regarding seed which was coated with a pesticide (to prevent insects from eating the seed) however, they used a pesticide that is toxic to birds and wildlife. Sickening!

Use the following words in your search string, in any search engine:

I haven't bought bird seed in awhile, but it sure makes me leery to buy it now! I was browsing "Big Lots!" website a few minutes ago, and saw the brand Morning Song for sale in their stores. After reading an article earlier about two Scott's seed products, I wanted to verify that the name was indeed the same one mentioned in the toxic seed. I then did a new search for "Scott's Recalled seed" in order to verify the package descriptions for those recalled and was surprised to find that the it came up with a PDF file from Scott's website:

So, it appears that there have been a few reasons to be suspicious of seed products bought recently. The following article, is dated 14 Mar 2012:

Maybe our kindness is best utilized by putting out fresh water and breadcrumbs for awhile. I guess some stores may be well-versed with this topic, but I'd be extremely careful about buying bird seed products for awhile.

I buy human grade peanuts in the shell (unsalted) for bigger birds in my garden, and I sit out there and enjoy the nuts as I toss them to blue jays, crows, squirrels and chipmunks. Hopefully, we'll be able to find a store where we can confidently buy SAFE food for our backyard visitors soon.

Hi, this is Laura Cyphert. I just want to report that the manufacturer has been very responsive and quick to act on testing the bird seed. Regardless of the outcome, however, I am disappointed that Wal Mart would not pull its product for the week or so it takes to test it, just to be on the safe side. It makes me very distrustful of Wal Mart to realize that they could be receiving reports that their products are being tested for possible deadly toxins, and they choose to "wait and see" while still selling the product. Kudos to the manufacturer and FDA for taking quick and appropriate action (so far), and thumbs down to Wal Mart.

I have been researching all weekend to find out what is killing the birds at my bird feeder here in Utah. Finally, some current information, Thank you. I am researching to see where I purchased the latest seed that I use. I know that the suet was purchased at Walmart and I think that the seed was also. Any report currently in Utah? I dump all of my seed in a bucket and throw away the container....hence I don't know what kind I purchased.

At my local Wal Mart, MorningSong was the only wild bird food they carried. Please let us know what you find out. One thing the manufacturer said to me is that they had not received reports of bird deaths from elsewhere in the country. Yet, I suspect most people would not know that they are poisoning and killing wild birds, because they could fly away and die. Therefore, it could be just luck that this connection was made when wild bird seed was fed to a flock of birds and 30 mice. What else could kill (nearly) all the birds and then all the mice? I can not think of any other direct correlation between the deaths other than the seed.