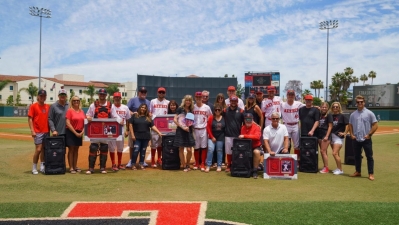 May 15, 2022 (San Diego) -  In its final home game of the 2022 regular season, San Diego State fell victim to Nevada 10-3 on Sunday, as the visiting Wolf Pack spoiled the Aztecs’ Senior Day festivities at Tony Gwynn Stadium.

With the loss, the Aztecs (17-36, 9-18 MW) were eliminated from contention for a berth in the Mountain West Championship later this month in San Diego.

SDSU was unable to gain ground on Air Force and Fresno State, both of which lost after entering the day in a tie for fourth place. The top four teams qualify for the postseason conference tournament to determine the MW’s automatic bid to NCAA regional competition. The Aztecs remain four games behind the Falcons and Bulldogs with three games left to play for all three programs.

On Sunday, San Diego State jumped out to a 3-0 lead; however, the Wolf Pack (27-22, 17-10 MW) scored 10 unanswered runs, capitalizing on 11 walks and five hit batters to secure themselves a finish of no lower than second place in the league standings.

The Aztecs came out swinging with a pair of doubles in the bottom of the first, as Cole Carrigg drove in Irvin Weems with a perfectly placed ball down the right-field line to give the host school an early advantage.

SDSU extended the margin in the second when Poway alum Deron Johnson led off with his second homer of the season, a solo blast to right, while Weems roped his second straight double to bring in Kenny LeBeau, who previously singled.

The score remained unchanged until the top of the fourth when the Wolf Pack put up four runs on just two hits to vault in front for good, 4-3. Anthony Flores drew a bases loaded walk, while Ryan Jackson hit a two-run double, followed by Tyler Bosetti’s RBI groundout.

Nevada ultimately put the game out of reach after combining for six runs over the final three innings. The Wolf Pack gave themselves some separation, with three markers in the seventh after loading the bases.

Jackson and Bosetti led off with consecutive walks, while Jacob Stinson followed with a sacrifice bunt before Josh Zamora was intentionally walked. Moments later, Landon Wallace drew a base on balls to bring home Jackson, while Bosetti crossed the plate when Caulfield’s grounder was mishandled at second base. On a 1-2 offering, Matt Clayton was hit by a pitch, as Zamora trotted in from third to provide the visitors a sudden 7-3 advantage.

Later in the eighth, Nevada put two more markers when Stinson scored on a passed ball with the bases loaded, while Caulfield lifted a sacrifice fly to right field, plating Bosetti.

The Wolf Pack closed out the scoring in the ninth when Clayton led off with a ground-rule double and eventually crossed the plate on Bosetti’s single through the left side.

Despite allowing three runs on eight hits and four walks with just one strikeout, Kade Morris (6-4) emerged with the victory after persevering through eight innings, while Chris Canada (2-1) took the loss after giving up those four runs in the fateful fourth. Following Canada’s exit, SDSU utilized six relievers, highlighted by Ricky Tibbett’s 2 2/3 scoreless innings with just one hit and no walks.

San Diego State closes out its 2022 campaign next weekend when it travels to the Silver State to battle UNLV May 19-21 in Las Vegas.