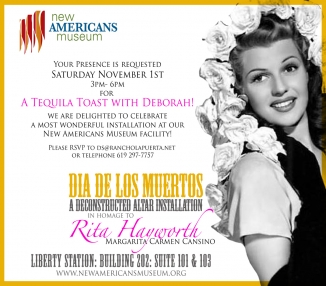 Rita Hayworth’s mother, of Irish descent, gave birth on October 17, 1918 to a daughter, Margarita Carmen Cansino, in Brooklyn, New York,; her father was 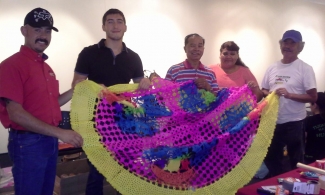 a Spaniard and a dancer. Subsequently, the family moved to California. However, Rita (Margarita) was discovered across the Mexican border in Tijuana, where she danced professionally with her father during the high life in the 30s and 40s. Details of the life she lived will be intentionally symbolized in the altar being created this weekend, perhaps of her marriage to Orson Wells.

This Mexican-founded holiday is compelling with its imagery of painted and colorfully dressed skeletons amidst a sense of celebration and happiness. As a tradition, it is fixed in the life of the Mexican people; and, as such, for many immigrants in the United States.

The holiday usually takes place in cemeteries where altars, or “altares” in Spanish, are created each year to celebrate and honor the deceased. Mariachis and trios play live music for the dead, as they move among the adorned graves and family celebrations. Favorite dishes of the deceased are brought in by the family.

The tradition, rituals, and actual building of the altar, including its arch, three levels, and inclusion of certai 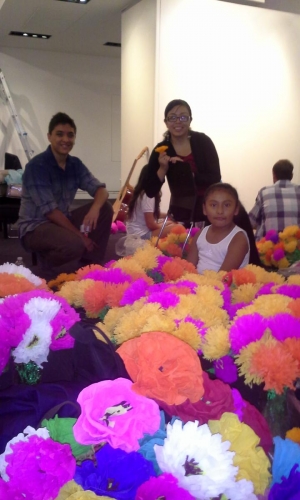 n items to be placed on the altar is the subject of Dia de los Muertos; A Deconstructed Altar Installation in Homage to Rita Hayworth.

On display in the Exhibition Gallery will be the completed altar to honor Rita Hayworth, created by students from both sides of the border, as well as from Spain, Portugal, and Argentina who are studying in Baja. Directly across the hallway in the Community Gallery will be the deconstructed altar exhibit. This exhibit illustrates each part of the altar separately.

Visitors will follow its construction through each stage, as the traditional and spiritual aspects of the rituals are revealed within the two exhibits. The staff at New Americans Museum hopes to “demystify and de-trivialize the sacred ritual of altar making on Day of the Dead, while celebrating the beauty of Latin American cultures.”

Professor Jose Flores from the University Atonoma de Baja, California teaches the origins, analysis, symbolism, and history of Dia de los Muertos to his students. Professor Flores is currently instrumental in installations of other ceremonial altars in various locations, including the Rancho La Puerta Spa in Tecate, Baja California.

The New Americas Museum at Liberty Station, the former naval training center, will hold its own grand re-opening in January 2015 in addition to opening Saturday for the Dia de Los Muertos celebration.