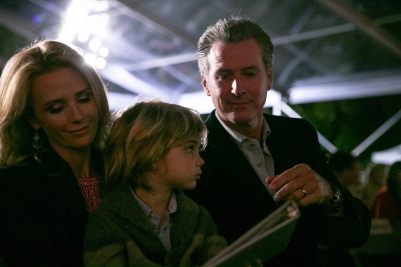 Photo:  Gov. Gavin Newsom with first partner, Jennifer Siebel Newsom, and their youngest son, Dutch, during the annual Christmas tree lighting at the Capitol on December 15, 2019. Photo by Anne Wernikoff for CalMatters

October 3, 2020 (Sacramento) - In a year when the coronavirus pandemic upended every aspect of normal life, the impact in the California Capitol was also dramatic. Lawmakers took an unprecedented two-month pause in the spring, when Gov. Gavin Newsom issued a statewide order for people to stay home to prevent the spread of the virus. They returned to the Capitol in May, passed a state budget shrunken by the pandemic-induced recession and began setting aside hundreds of bills that would no longer make the cut in this truncated year. Faced with less time to hold hearings and less money to spend on new initiatives, lawmakers chucked an estimated three-quarters of the bills introduced at the beginning of the year.

Abandoned or rejected along the way were bills requiring police to intervene if they see officers using excessive force, allow homeowners to request a forbearance on their mortgages during the pandemic, and launch a “Green New Deal” to fight climate change.

But even with their reduced workload, lawmakers tackled numerous thorny issues, passing legislation that could impact life in California for years to come — to allow more workers to take paid family leave, make it easier to get mental health care, and ban flavored tobacco, among others.

Then it fell to Newsom to either sign or veto the legislation by a Sept. 30 deadline. Here’s the final tally on the fates of 20 key bills.