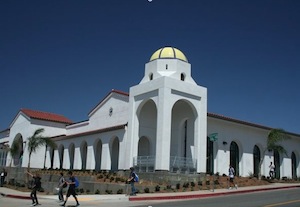 May 23, 2013 (Lemon Grove) – On June 1 at 10 a.m., the new Mission Revival style Lemon Grove Library, 3001 School Lane, will open its doors for a day of tours, new library cards, brand new books and resources, a new Friends of the Library bookstore, entertainment, music, food and rejoicing as this community of some 25,000 residents finally gets the library of its dreams.

Reigning--and ringing--in the new bell tower will be the school district's original, 1894 school bell, recovered and restored in 2002 by the Lemon Grove Historical Society and reinstalled by the Lemon Grove School District on Mar. 12, 2013.

Built by Legacy, Inc., in association with Roesling Nakamura Terada Architects, the library was made possible by the people of Lemon Grove, who voted overwhelmingly in 2008 for Proposition W, the $28 million bond that not only funded the library, but the repairs and improvements to aging local schools, among them, new science labs, classroom technology, new flooring, new playground equipment, better security measures and more.

Architect Raul Diaz got a special surprise in March when Thomas Remensperger, CEO of Legacy, and Roesling Nakamura Terada unveiled their joint gift to the project -- gleaming yellow and cobalt blue tile on the dome, something Diaz wished for, but had rejected in order to stay on budget.  David Gardner, Jr., project manager for Legacy, managed to keep the tile a secret by smuggling it into the construction site when Diaz was absent.

The 13,210 square foot, joint use library is on the campus of Lemon Grove Academy for the Sciences and Humanities, a revamped K-8 campus with a science, technology and engineering focus balanced by the arts and humanities.  Though owned by the school district, the library will be operated by the San Diego County Library System as its newest branch.

The Lemon Grove School District (1893) is no stranger to Mission Revival architecture, having grown up in a late 19th century town dotted with Mission style homes and businesses.  The 1924 Lemon Grove Grammar School featured an arched arcade over paneled doors typical of the Mission style.  When this classic facade -- the backdrop for countless school photographs -- was demolished early in 1976, the memory lingered on in photographs at the Historical Society.  They inspired Legacy, Inc., to conceive of the elegant, Mission Revival library replete with arcade, clerestory bell tower, multiple arched windows, quatrefoil adornments, simple, graceful lines and shimmering white stucco.  The library stands on the site of the 1924 school.

The distinctive exterior is complemented by a handsome interior, featuring a soaring, vaulted ceiling in the Great Room and a spacious youth area named in memory of Virginia Spencer Thren, whose husband, the late Daniel Thren, a prominent realtor, bequeathed $500,000 for a new library in Lemon Grove, an amount that has now grown to $937,159 due to interest on the principal.  Other amenities include strong wood accents, quiet study and computer rooms, staff areas, and the beautiful Rosemary Putnam Community Room and kitchen, opening onto Poet's Patio, a charmingly landscaped space for outdoor events.

Rosemary Putnam, former president of the Friends of the Lemon Grove Library and founder of its popular bookstore, labored for 25 years to raise funds "one used book at a time" for the library.  In 2012 she presented the school district with $65,000--$60,000 from the Friends for the new, first-day book collection and $5,000 that she had requested from the City of Lemon Grove for the Family Literacy Collection.  Matched dollar-for-dollar by the San Diego County Library System, the nest egg is actually $130,000.

The Proposition W bond campaign was co-chaired by Helen Ofield, president of the Lemon Grove Historical Society, and Ilse Hanning, former assistant superintendent of the Lemon Grove School District.  For months, the pair worked closely with school superintendent Ernest Anastos, whose vision and energy drove the project, prompting Ofield to dub him the "Zen master of school bond measures." 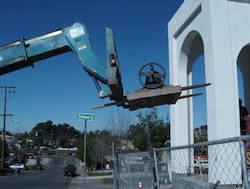 On June 1, the City will close School Lane to facilitate outdoor seating for dignitaries and guests, and space for the general public during the program scheduled to start at 10 a.m.  The Lemon Grove Academy marching band will perform.  Supervisor Dianne Jacob, Mayor Mary Sessom, County Library System director José Aponte, School Board president Blanca Brown, Friends of the Library president Jim Elliott, and others will speak prior to cutting the ribbon and opening the front doors.

Among the special guests will be Jonna Van Zanten Waite, daughter of Albert Van Zanten, the grammar school teacher who rescued the school bell in 1976 and stored it for 25 years until the historical society retrieved it; Don and Cathy Haynes, owners of The Finishing Factory, Santee, who donated sandblasting to restore the bell; and Rosemary Putnam, the "Den Mother of the Lemon Grove Library."

Festive activities, sponsored by Lemon Grove Rotary, will run until 5 p.m. in the ball field behind the Academy.  The public is warmlu invited to attend this big community celebration.