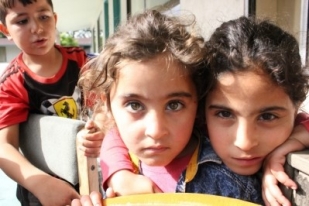 May 21, 2017 (San Diego) -- The Syria Civil War has exposed millions of civilians to extreme physical and emotional trauma. Anxiety is common among Syrian refugee children, affecting more than four in five children, according to research presented at the Annual Meeting of the American Psychiatric Association in San Diego.

Although the research was done in Michigan, the findings are also relevant for San Diego’s East County, the largest resettlement area for Syrian refugees in recent months/

The research was led by Arash Javanbakht M.D, director of the Stress, Trauma, and Anxiety Research Clinic in Wayne State University Department of Psychiatry and Behavioral Neuroscience.

A bilingual team of researchers recruited participants ranging in age from six to 80 at primary care clinics in Southeastern Michigan, where refugees receive health assessments within the first month following arrival in the U.S. They screened adults for PTSD and children for anxiety.

They analyzed information from 59 children, an average age of just over 11 years old, from 20 families. Based on the screening, 61 percent of children had probable anxiety diagnosis and 85 percent had probable separation anxiety diagnosis. PTSD symptoms were common among all adults and more common among mothers than fathers. A higher total anxiety score among children was associated with higher PTSD score among mothers. Children with probable separation anxiety were more likely to be younger.

The high prevalence of anxiety suggests that interventions are acutely needed for refugee children from Syria, according to the researchers.

This research is part of a larger study of Syrian refugees that will examine unique cultural factors within this population and look at potential biological markers of trauma.