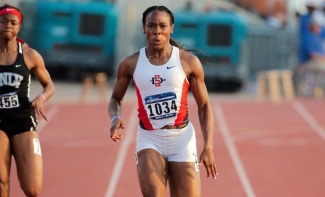 The Aztecs’ day started off on the right foot with a sixth-place finish in the 4x100. Micha Auzenne, Simone Glenn and Rochene Smith put San Diego State in a solid spot as the race unfolded. As the anchor, Henderson pulled away from the pack using her lightning speed to secure her team’s appearance in Saturday’s final with a 43.76 time. The 4x100 final is slated for 3:32 p.m. (PT) Saturday.

One hour later, Henderson secured her second appearance in the finals with an impressive performance in the 100. Running into a 1.6-meters-per-hour headwind, the St. Louis native won the third heat, crossing the finish line in 11.25 to finish fourth overall. The 100 meters final is scheduled for 4:22 p.m. (PT) Saturday.

Making her NCAA Championships debut in the 400 hurdles, freshman Andrenette Knight broke the 58-second mark for just the third time this season, racing to a 57.80 time for 11th.

The 100 hurdles saw Auzenne also finish 11th. The first Aztec to compete in the event at consecutive national meets since 2004-05 (Heather Heron), Auzenne clocked in at 13.27.

The final day of the NCAA Championships will broadcast live on ESPN and will stream live on WatchESPN.

(Top 8 in each event score)

Women’s 100 Meters Semifinals (out of 24 entrants)

Women’s 200 Meters Semifinals (out of 23 entrants)