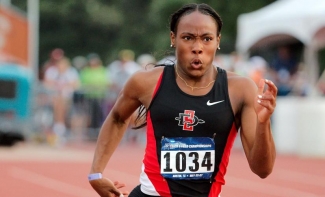 The duo shined at the UW Preview, the season-opening meet for the 22nd-ranked Aztecs, on Saturday in Seattle.

Draxler set an indoor personal best in the pole vault by clearing 13 feet, 9 ¾ inches (4.21m) to finish second behind 2016 Olympian Diamara Planell Cruz of Puerto Rico in a jump-off. The top collegian in the loaded meet, Draxler’s 13-09.75 is the best in the MW this year, sixth-best mark in Aztec indoor history and the seventh best in the country this year. It was Draxler’s fifth career MW weekly honor (three times indoor, twice outdoor).

Henderson, meanwhile, was second in the finals of the 60-meter dash in a time of 7.33 seconds, only trailing seven-time long jump world champion Brittany Reese (7.31). The top collegian in an event that featured numerous runners from No. 1 Oregon, the time was the fastest in the MW this season and tied for the eighth fastest in the country this year. Bettering her prelim time of 7.43, Henderson also ran a leg of a 4x400 at the end of the meet. It was Henderson’s first career MW indoor weekly honor and fourth overall (also three outdoor awards).

The Aztecs return to action on Jan. 27 at the New Mexico Team Invitational in Albuquerque, N.M.