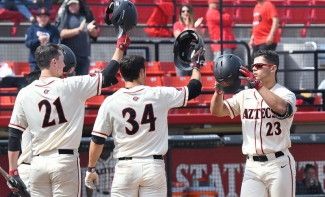 March 27, 2018 (San Diego) - Redshirt junior designated hitter Chad Bible of the San Diego State baseball team was named Mountain West Player of the Week on Tuesday afternoon. For the week, Bible went 9-for-19 (.474) with three home runs, a double, and seven RBIs to help push SDSU to a 3-1 showing a week ago.

Bible homered in all three games at UNLV this past weekend, becoming the first Aztec since May 2015 to homer in three consecutive games. Bible registered a career-high four hits and four RBI in a 4-for-6 performance during SDSU's 17-8 win over UNLV on Saturday. For the week, Bible hit .438 with runners on base (7-for-16) and .455 (5-for-11) with runners in scoring position.
Bible's five home runs in Mountain West play leads all players in the conference. The Valencia, Calif. native is also fifth in the league with a .457 batting average in MW play, second in the league with 12 conference RBIs, and second in the MW with a .971 conference slugging percentage.

On the year, Bible is hitting .337 with five doubles, a triple, five home runs, and 20 RBIs, all a year after being diagnosed with stage 2 Hodgkin's lymphoma, which he officially defeated last August.

The No. 23/23 Aztecs resume play tonight at Long Beach State before starting a three-game MW series against New Mexico on Thursday at 6:00 p.m.