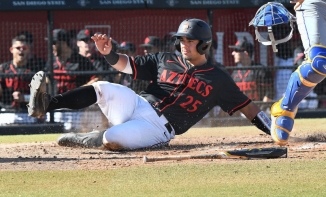 March 11, 2018 (San Diego) - The No. 25 San Diego State baseball team claimed a series win against Mountain West foe Air Force by splitting with the Falcons at Tony Gwynn Stadium on Sunday. After the Falcons won the first game 7-3, SDSU responded with a 3-2 victory in the nightcap. The Aztecs are now 10-5 overall and 4-1 in the Mountain West, while Air Force is 5-10 on the season with a 1-2 conference mark.

SDSU starter Harrison Pyatt started his fourth start of the season on a positive note, holding Air Force scoreless for the game’s first four innings and owning a span of 10 consecutive batters retired between the second and fourth innings, including an impressive stretch in the second inning where the junior struck out the side in order.

However, the Falcons were able to muster the game’s first few runs in the fifth inning, using a four-run, three-hit inning to grab a 4-0 lead. Air Force continued to swing the bats well an inning later, collecting a pair of runs on three hits to stretch its lead to 6-0.

After a solo home run by Air Force’s Nic Ready hit a solo home run in the top of the seventh to make it 7-0, the Aztecs responded with a long ball of their own in the home half, using a two-run blast by Chad Bible – his second of the year – to cut the deficit to 7-2.

Matt Rudick drew a one-out walk and David Hensley hit a double to left-centerfield in the ensuing at-bat to give the Aztecs a pair of runners in scoring position in the bottom of the ninth. Chase Calabuig was able to drive Rudick home with a sacrifice fly to left field to make it 7-3, however Air Force’s Josh Leaser was able to stop any further threat and end the game.

Bible had a career day at the plate in the first game of the doubleheader, recording a career-high three hits in a 3-for-5 showing at the plate. Chase Calabuig and Matt Rudick also contributed multi-hit showings, going 2-for-4 and 2-for-3, respectively.

Casey Schmitt performed well coming out of the SDSU bullpen, posting a hitless eighth and ninth inning for the Aztecs.

Led by a brilliant performance by SDSU starter Garrett Hill, the Aztecs were able to salvage a doubleheader split on Sunday, defeating Air Force, 3-2.

It was Hill’s show from the very beginning, taking a no-hit bid into the sixth inning before allowing a leadoff single to start the sixth. Hill finished his outing with a season-high 6.2 innings pitched, with only one hit allowed, no runs, and eight strikeouts.

SDSU collected all of its run scoring in the first two innings with Matt Rudick scoring on a throwing error by Air Force third baseman Ryan Robb on a Chase Calabuig sacrifice bunt. During the next at-bat, Jordan Verdon hit a ball deep in the outfield that allowed David Hensley to score on a sacrifice fly.

In the second, Dean Nevarez hit his first home run of the 2018 campaign over the left-centerfield wall to make it a 3-0 SDSU lead.

SDSU was able to maintain that 3-0 lead for the majority of the game, largely in thanks to Hill’s efficient performance on the mound. After Hill hit back-to-back batters with two outs in the seventh, reliever Adrian Mardueno was able to strand the bases loaded to end the threat.

The Falcons again stranded the bases loaded in the eighth but scratched across an unearned run on Jorge Fernandez, who took over on the hill for Mardueno. With the bases packed and two down, Fernandez was able strikeout pinch hitter Gabe Martinez looking and preserve a 3-1 lead.

Air Force failed to go down quietly, however, as a pair of Aztec errors allowed the Falcons to cut SDSU’s lead to just one. With the tying run on first base, Fernandez was able to halt Air Force’s last-chance comeback attempt striking out Falcons No. 3 hitter Rob Dau to end the game and secure SDSU’s series-clinching win.

Fernandez earned his third save of the season in the effort, now allowing an earned run over two innings pitched while striking out three.

SDSU travels to nearby San Diego for a midweek contest on Tuesday at 6:00 p.m. Next weekend, the Aztecs take a break from MW play and head to San Luis Obispo, Calif. to take on Cal Poly for a three-game weekend series.