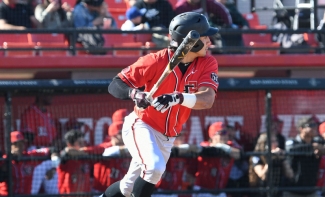 March 17, 2018 (San Luis Obispo) - The No. 25 San Diego State baseball team fell victim to a walk-off wild pitch in the bottom of the ninth inning to fall in Saturday night’s road contest at Cal Poly 5-4. The Aztecs drop to 12-6 on the year, while Cal Poly ups its record to 8-11.

Right-handed pitcher Harrison Pyatt turned in one of his best performances of the 2018 season Saturday night, allowing just one run in 5.2 innings of work while scattering five hits, striking out six, and walking two.  Pyatt started his outing with five shutout innings with only three hits allowed before running into a bit of a jam in the sixth, as Cal Poly broke through with its first run of the game in the sixth with a one-run, two-hit frame.

The Aztecs were first to break a scoreless tie in the fourth inning, as Julian Escobedo drove home Dean Nevarez from first base on a two-out RBI double to right-centerfield. The Aztecs added a pair of runs in the sixth after Jordan Verdon led off the inning with a double to right and later came around to score on a wild pitch. Casey Schmitt drove in Nevarez, who singled earlier in the inning, on a sacrifice fly to give the Aztecs a 3-0 lead.

Verdon doubled for the fourth time in the series in the top of the seventh, hitting a ball down the right-field line to score Chase Calabuig and answer Cal Poly’s sixth-inning run to give the Aztecs a 4-1 edge.

Cal Poly led off the bottom of the eighth with back-to-back singles off SDSU reliever Noah Fluman. Justin Goossen-Brown took over on the mound and after striking out the first batter he faced, the Mustangs recorded back-to-back RBI singles to cut SDSU’s lead to 4-3.

The Mustangs tied the game in the eighth inning after Casey Schmitt hit Cal Poly’s Kyle Marinconz with a pitch with the bases loaded.

Cal Poly began the bottom of the ninth with a leadoff Nick Meyer single. Meyer eventually advanced to third after each of the next two batters grounded out. Meyer ultimately scored the game-winning run after a 3-0 pitch from Schmitt sailed wide and to the backstop.

At the plate, the Aztecs outhit Cal Poly 14-10. SDSU had five players with multi-hit performances, including Escobedo, who notched a career-high four hits in a 4-for-4 day. Nevarez recorded a 3-for-4 showing at the plate, while Verdon, Calabuig, and David Hensley each had a pair of hits.

Tomorrow’s rubber game is scheduled for 1:00 p.m.  SDSU has game one in this series, winning 9-7.