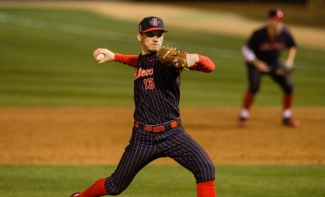 The Aztecs swung the bat well in the early stages of the game, scoring a pair of first-inning runs in thanks to a Jordan Verdon double scoring David Hensley and Julian Escobedo. An inning later, the Aztecs built that lead to 3-0 with leadoff hitter Matt Rudick bringing home Escobedo on a single through the left side of the inning.

Arizona chipped away in the bottom of the second, scoring a run on a double play with the bases loaded. The Wildcats obtained the lead and never looked back after a three-run, three-hit inning gave Arizona a 4-3 advantage.

SDSU brought home a run in the ninth with David Hensley hitting a sacrifice fly to the warning track in left field to score Isaiah Parra.

Leadoff hitter Matt Rudick led the Aztecs with a 3-for-4 day at the plate including an RBI. Chad Bible also recorded a multi-hit performance, posting a 2-for-4 showing.

Justin Goossen-Brown was dealt the loss and saw his record evened at 1-1, going 2.1 innings with four hits and four runs allowed in his second start of the season. A pair of freshmen gave SDSU some strong relief during the middle innings, with Casey O’Sullivan and Christian Winston teaming up for 2.1 innings of shutout and hitless relief.

SDSU returns home for a Mountain West series against Air Force. The series opener between the Aztecs and Falcons is scheduled for Friday, March 9, at 6:00 p.m. at Tony Gwynn Stadium.