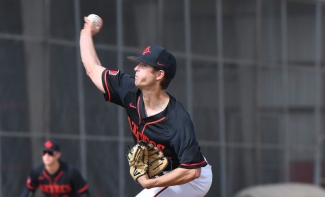 March 18, 2018 (San Luis Obispo) - Highlighted by Garrett Hill’s 6.2 shutout innings, the No. 25 San Diego State baseball team earned a series-clinching win over Cal Poly with a 3-2 win over the Mustangs on Sunday afternoon.

Hill started his outing off in commanding fashion, holding the Mustangs hitless for the game’s first four innings before allowing a leadoff single to start the bottom of the fifth. Hill, who lowered his season ERA to 0.95 and earned his fourth win of the season in his Sunday outing, finished the day with 6.2 innings pitched, five strikeouts – all swinging – with five hits and three walks allowed.

SDSU scored all its runs in a three-run top of the third that started with back-to-back singles by Jacob Maekawa and Matt Rudick. Chase Calabuig later drove in Maekawa on a single up the middle, and to cap SDSU’s scoring, Jordan Verdon continued his hot streak with a two-RBI single to right-centerfield to score Rudick and David Hensley.

Cal Poly made a comeback attempt in the bottom of the ninth against Aztec closer Jorge Fernandez with a two-run, three-hit frame. After Cal Poly’s Alex McKenna drove in the Mustangs’ second run on a sacrifice fly with two outs, Fernandez forced Kyle Marinconz to fly out to Calabuig in right field to end the ballgame.

Rudick, Calabuig and Verdon led the Aztecs offensively, combining for six of SDSU’s 10 hits, with each posting a 2-for-4 day at the plate.

In San Diego State’s 3-1 week, Verdon paced the offense to the tune of an 8-for-17 (.471) showing at the plate, logging six doubles with nine RBI for a .824 slugging percentage.

The Aztecs now return home and host Cal State Bakersfield for a midweek contest on Tuesday, March 20 at 6 p.m.