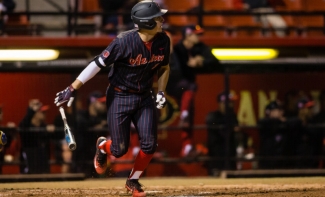 Aztecs are 7-1 all-time at Fowler Park

March 13, 2018 (San Diego) - The San Diego State baseball team took an 8-3 decision over San Diego at Fowler Park on Tuesday night, using a seven-run sixth inning to overcome an early 2-0 deficit and salvage a split of the season series against the Toreros. SDSU improves to 11-5 on the season, while San Diego slips to 9-8.

Facing a 2-0 hole heading into the sixth inning, the Aztecs broke out for its largest single-inning outburst of the season, scoring seven runs with the help of two hits, three walks, and three Torero errors.

Matt Rudick led off the inning with a walk and advanced to second on a David Hensley single. Chase Calabuig laid down a sacrifice bunt, however, Torero pitcher Anthony Donatella was off target with his throw to first base, allowing Rudick to score and Calabuig to reach safely. Chad Bible was hit by a pitch an at-bat later, and the game-determining blow came off the bat of Jordan Verdon, who missed a grand slam by just a few feet and settled for a two-RBI double off the centerfield wall to give the Aztecs a 3-2 lead.

Dean Nevarez brought Chad Bible on a sacrifice fly to bring the score to 4-2. To cap the offensive showing in the sixth, Verdon scored on a wild pitch, Julian Escobedo scored on an error by USD second baseman Paul Kunst, and Jacob Maekawa crossed the plate while Rudick was hung up between first and second on a stolen base attempt.

The sixth inning provided the Aztecs with more than enough offense but SDSU built its lead to 9-3 thanks to a Nevarez RBI double in the seventh and an Escobedo sacrifice fly in the ninth.

The Toreros presented a bit of a threat in the ninth, however, SDSU turned to Jorge Fernandez, who induced a game-ending 6-4-3 double play with the bases loaded to secure SDSU’s 9-3 victory.

Daniel Ritcheson earned his first collegiate win with two innings of relief, allowing just one unearned run on one hit with a strikeout.