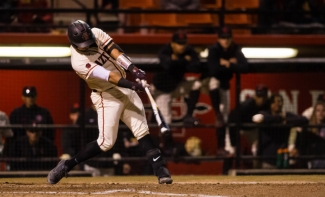 March 20, 2018 (San Diego) - Dean Nevarez’s walk-off single with two outs and the bases loaded in the bottom of the ninth inning sealed the No. 25 San Diego State baseball team’s 5-4 victory over CSU Bakersfield on Tuesday night. Through 20 games, the SDSU baseball team now sits at 14-6 on the year, while CSU Bakersfield falls to 9-13.

The game started with three freshmen shining for the Aztecs on the mound, as Jacob Flores, Casey O’Sullivan, and Daniel Ritcheson combined to give the Aztecs six shutout innings. Four of the game’s first six innings for SDSU pitching were 1-2-3 frames and the trio combined for two hits allowed, one walk, one hit by pitch, while striking out five.

The Aztecs scored the game’s first two runs, using a Jacob Maekawa RBI double in the second and a first-and-third double steal in the third to score Chase Calabuig and give SDSU an early 2-0 lead.

The game’s next three frames would be scoreless and in the top of the seventh, CSU Bakersfield cut SDSU’s lead to one with a Mark Pena RBI single. CSUB added three runs in thanks to four hits and two Aztec errors in the top of the eighth to take a 4-2 lead.

The Aztecs immediately chipped away at the Roadrunners’ lead, using Julian Escobedo’s first career home run in the top of the eighth to make it a one-run deficit heading to the ninth.

Adrian Mardueno, who eventually earned the win for the Aztecs, helped set the table for SDSU’s ninth-inning comeback by striking out the side in order.

Pinch hitter John Dearth led off the bottom of the ninth by getting hit by a Naithen Dewsnap pitch. Denz’l Chapman then pinch ran for Dearth, and during the next at bat, Matt Rudick reached base after CSUB’s Alec Dailey failed to cleanly field a sacrifice bunt, giving the Aztecs a pair of runners on base with no one out.

The Aztecs continued to use small ball in the bottom of the ninth, as David Hensley laid down a sacrifice bunt and forced another CSUB error with Dewsnap throwing the ball wide of third baseman Daniel Carrizosa in an attempt to get the lead runner Chapman. Chapman scored on the play to tie the game at 4-4.

With one out in the inning and runners at first and second, pinch hitter Sean Ross hit a single through the middle of the infield to load the bases. After Dewsnap induced a Jordan Verdon pop out, the scene was set for Dean Nevarez to pull off the two-out heroics as the junior catcher hit a ball through the left side of the infield to score Hensley from third base and secure SDSU’s 5-4 walk-off win.

Escobedo, Nevarez and Maekawa led the Aztec lineup with two hits each.