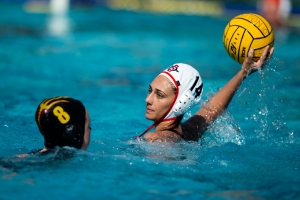 February 14, 2019 (San Diego) - The No. 25 San Diego State water polo team knocked off the University of Toronto 11-3 in an exhibition match Thursday afternoon. Playing in the rain, the Aztecs allowed the opening goal then reeled of eight unanswered goals.

“It was a great win,” head coach Carin Crawford said after the game. “We are young in some positions and there are a lot of things I know we can do better, and this game gave us an opportunity to work on that. On our 6-on-5s, we drew plenty of kick outs, and the centers were productive in terms of earning power plays for us and we converted 6 of 14, which is a decent conversion rate.”

Sophomore Lindsy Peterson led the Aztecs with three goals. Karli Canale had two and senior captain Hannah Carrillo had one with two assists.

The Aztecs got off to a slow start offensively and only had two goals at halftime but scored nine goals in the second half – five in the third quarter and four in the final quarter.

Peterson sparked the second half scoring spree with two goals in the first two minute of the third quarter.

The Aztecs will be at the Barbara Kalbus Invitational Feb. 23-25 at UC Irvine. Their first game of the tournament is against No. 1 USC.