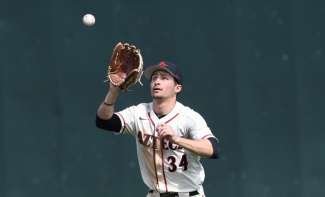 Aztecs score 22 runs in win over UNLV, tied for the most in a game since 2007

March 25, 2018 (Las Vegas) - The San Diego State baseball team exploded for 22 runs and 23 hits in a 22-7 drubbing of UNLV on Sunday, leaving the Aztecs with its fifth consecutive weekend series win and now have sole possession of second place in the Mountain West, sitting just a half-game back of Nevada (7-2 MW), which defeated Fresno State earlier today. The Aztecs improve to 16-7 on the year (6-2 MW), while UNLV falls to 20-5 (6-3 MW).

SDSU opened the scoring with a two-run home run by Chad Bible in the top of the first. It was Bible’s third consecutive game with a home run, and he now leads the team with five home runs on the season.

The Aztecs continued the scoring in the third after UNLV posted a three-run bottom of the first to take a brief 3-2 lead. SDSU regained its lead after Jordan Verdon hit a grand slam to take a 6-3 lead, and in the ensuing at-bat, Dean Nevarez homered to make it back-to-back home runs and create a 7-3 SDSU lead.

The Aztecs would not relinquish that lead for the remainder of the game despite allowing two runs in the bottom of the third, a run in the fourth, and a run in the seventh.

SDSU broke things wide open with a seven-run fourth inning, including a Verdon 2-RBI double, a 2-RBI single by Escobedo, an RBI single by Jacob Maekawa, and an RBI double by David Hensley. After SDSU held a 14-5 lead after three and a half innings, SDSU grew that lead to 18-6 after a three-run fifth inning and a sacrifice fly by Escobedo in the sixth.

A three-run home run by Chase Calabuig highlighted the seventh inning and brought SDSU’s lead to 21-6. After UNLV posted a run in the home half of the seventh, Calabuig followed his home run with an RBI single in the ninth to score Hensley and bring the score to its final, 22-7.

The Aztecs make a trip to Long Beach State for a Tuesday contest at 6:00 p.m. this week. Next weekend, the Aztecs are at home against Mountain West foe New Mexico.