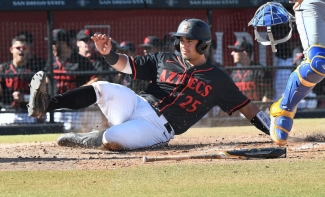 The Rebels opened the scoring with a two-run first inning. The Aztecs responded with Chase Calabuig hitting an RBI double in the top of the third to score Julian Escobedo before Dean Nevarez hit a game-tying solo home run in the top of the fourth to knot the score at 2-2.

UNLV regained its lead in the home half of the fourth after Max Smith scored on a wild pitch.

The Aztecs went to the long ball to tie the game once again in the top of the sixth, as Chad Bible hit his team-leading third home run of the season to tie the game at 3-3.

The Rebels took a 4-3 lead in the bottom of the eighth with a Grant Robbins RBI double. UNLV closer Bryan Menendez retired SDSU’s hitters in order in the top of the ninth to seal UNLV’s 20th win of the season.

San Diego State and UNLV resume its three-game series tomorrow at 2:00 p.m. Junior right-hander Garrett Hill (4-0, 0.95 ERA) is scheduled to take the ball for the Aztecs, while UNLV is projected to send RHP Trevor Horn (2-0, 6.49 ERA) to the mound.