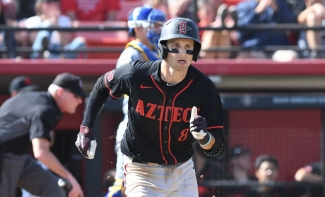 The Aztecs quickly grabbed a 6-0 lead, recording a pair of runs in the first before scoring four in the second.

Chad Bible and Jordan Verdon each drove in a run in the top of the first to build an early 2-0 lead. After SDSU starter Garrett Hill posted a scoreless first inning, the Aztecs broke things open offensively, posting a four-run, three-hit second inning featuring RBI doubles from Casey Schmitt and Bible.

The Aztecs scored for the third consecutive frame in the top half of the third, using another Schmitt RBI double to bring in Julian Escobedo and build the lead to 7-1.

After the SDSU lineup went scoreless in the top of the fourth – the only frame the Aztecs failed to score a run – Schmitt logged his third RBI of the day on a groundout to shortstop to score Dean Nevarez.

The Aztecs continued its relentless offensive pressure in the top of the sixth, using back-to-back home runs by Bible and Verdon for an 11-2 lead.

UNLV cut SDSU’s lead to six with a four-run bottom of the sixth, but the Aztecs built its lead back up to 14-6 with Jacob Maekawa’s first career home run – a 2-RBI shot over the wall in left-centerfield – and a Chase Calabuig RBI on a 4-3 groundout.

SDSU wrapped up its biggest offensive day of the season with a run in the eighth with a Schmitt RBI single and a pair of runs in the ninth featuring RBI doubles from Verdon and Calabuig.

Christian Winston posted a pair of scoreless frames for the Aztecs to end the game, allowing just one hit over the eighth and ninth innings while striking out two.

Tomorrow’s rubber game against UNLV is scheduled for 1:00 p.m. Following the series finale against the Rebels, the Aztecs make a trip north for a Tuesday contest at Long Beach State.