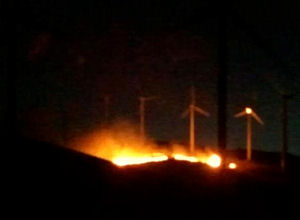 By Miriam Raftery
Photos by Donna Moran
August 2, 2012 (San Diego’s East County) – For the second time this summer, an industrial wind turbine sparked a grass fire in Southern California. On Friday night, July 27, a large wind turbine burst into flame in the Tehachapi are above the Mohave Desert. In June, as ECM previously reported, a wind turbine fire in the Whitewater area of Riverside County spread into a wildland fire that charred 367 acres and forced evacuation of homes.
Friday’s fire was photographed by passing motorist Donna Moran, who ironically was on her way home from a Friends of the Mojave meeting at which dangers of wind turbine fires had been discussed.  The group has indicated that the Mojave fire occurred in an older turbine model built by Danish manufacturer NEG Micon, built before 2004 before the company merged with Vestas. It was installed by Oak Creek Energy and owned by American Wind Capital. 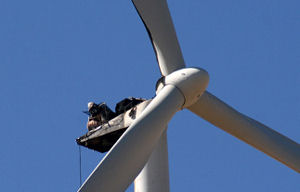 Wind turbines contain lubricating oils that can leak; grease deposits under the turbine nacelles can ignite.
On August 8, San Diego Supervisors will hold a hearing on Tule Wind, which seeks to build turbines on both County-controlled private land as well as federal, state and tribal lands in McCain Valley. The County will also soon consider a wind ordinance that could enable construction of wind turbines in other East County Communities.
Fire danger remains a burning issue in a County that has previously suffered two of the worst wildfires in the state’s history and where brush fires are so commonplace that most media fails to even report smaller blazes that leave nerves jangled across the backcountry.
For more details on Friday’s fire, visit: