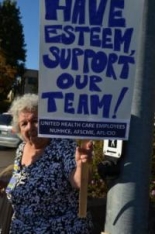 November  20, 2012 (La Mesa)—Some workers arrived after their shifts ended; others came from home to join a march yesterday afternoon outside Grossmont Hospital. All were determined to draw public attention to their efforts to gain better working conditions and compensation.

Gloria Schwatka, a worker, told me that Sodexo first offered a wage freeze and then a scant 0.05% wage increase in the third year.

“Sodexo doesn’t want full time employees, but only part time,” she said, noting that this way the company can avoid paying benefits. 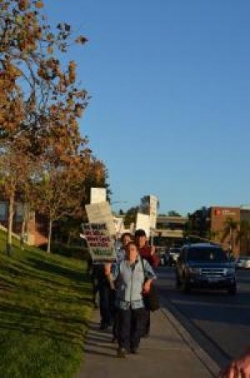 The United Health Care Employees union is asking is for a 3% increase in their base pay.

According to Bill Rouse, one of the lead negotiators for the union, the starting pay at the hospital is $9.09 an hour and the average pay for 250 employees is $9.55 and hour. Employees also have to pay for their own health insurance, which ranges from $22.00 to $80.00 a week.

Patty Araballo, another of the negotiators, said that this was an information picket and that lockouts were not even contemplated at this point. She emphasized that workers “have been waiting for a wage increase for three years.” They have not left the negotiations and all they are trying to get are “better wages and healthcare.”

Senior steward Alex Burstein told ECM that workers want “to support fair treatment and a wage that we can make a marginal living on.” They want to continue to give good food to patients and good cleaning of the hospital. The hard work they do deserves more than the 1.75% that the company last offered. They will take 3%. Burstein also did point out that the nurses’ union got a 3% wage increase. He believes that it is not fair for management to “expect employees to scratch and scramble.” He has 33 years of service at the hospital.

Larry Winters, a registered nurse who works in the Emergency Department told ECM that he “supports our housekeepers.” Without them, he said, “Our hospital would not be clean and our infection control would not work.”

The fight with management is not new. There have been many battles to keep to a minimum standard of rights  for workers, employees said. According to Kerry Loud, who has been at Sodexo for 20 years, the last fight involved weekend off. The company decided to cut that to one weekend off a month, but later restored two weekends a month of time off.

Jose Ramirez, another one of the union stewards, said “We are at the negotiations table. We are simply workers, but they do not want to grant us a wage increase.” He added that part-timers are not allowed to become full-time, and that management gets rid of those who make it two-thirds of the way to full time status.

Lucia Diaz told ECM that evaluations have been held back, and that grievances against management are not moved forward. These grievances are usually violations of the contract that could lead to some extra pay as compensation. She added that there is no opportunity for advancement.

After talking to the workers, I did contact the hospital by physically walking to the public information desk. I was told that John Frieedman of Sodexo would call to comment on this, and to fill in what is going on from their point of view.  Frieedman did not call back.