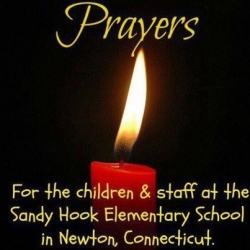 December 14, 2012 (San Diego’s East County) – News of today’s shooting at Sandy Hill Elementary School in Newtown, Connecticut, where a gunman killed 26 people including 20 children before taking his own life, has triggered strong reactions here in San Diego County, a region that has suffered through numerous school shootings.

“Personally I am very shocked and saddened…I have shed tears,” Fran Zumwalt, a teacher wounded in the 2001 Granite Hills High School shootings, told ECM.  “Words cannot express the sorrow I feel for those who lost loved ones today. No parents should ever lose a child.  I hope all of the citizens of Connecticut can feel the prayers of all of us—for their children, their families and their communities.”

The Granite  Hills shooter wounded five people, leaving Zumwalt with injuries to her jaw and leg. But swift action by El Cajon Police Officer Richard Agundez, who was assigned as a school resource officer on campus, prevented a far worse tragedy. Agundez shot and disabled the 18-year-old gunman, earning a Medal of Valor for saving lives.  The Granite Hills shooting occurred just three weeks after the deadly Santana High School massacre, in which a 14-yaer-old student who had been bullied opened fire, killing two students and injuring 13 others.

The 2010 Kelly Elementary School shooting in Carlsbad injured two young girls before construction workers intervened to stop the gunman.  In 1996, a graduate student at San Diego State University shot and killed three of his professors. San Diego’s earliest school shooting occurred in 1979, when a 16-year-old girl shot and killed two and wounded 9 others at Cleveland Elementary School, claiming she “didn’t like Mondays.”

“Tragic events such as these have similarities and also unique differences,” Zumwalt said.

One lesson learned from the Granite Hills and Santana tragedies was that both shooters had indicated that they planned to harm people, she recalled.  After the shootings, students and faculty were encouraged to report trouble signs. In addition, class sizes were reduced and the number of students per counselor was also lowered to enable adults to have a better chance to observe potential behaviors of concern.

“Unfortunately, class sizes are larger now, as is the radio of students per counselor, due to years of school budget cuts in California,” Zumwalt noted. “Being vigilant is important now, because sadly, there may be another person who may copy the actions of the Connecticut shooter.”

From her experience, she has learned that everyone involved in a school shooting reacts differently. “We learned that being closer or farther away from the actual shooting does not determine who is more or less affected,” she said.  Listening is important; students should be encouraged to ask questions of experts to help them process their grief, but keep answers age appropriate, she said.  “When children know the adults in their world are involved in working to secure their safety, theyw 8ll feel and be safer.”

“Emergency planning—what steps to take if a shooting occurs—will save lives,” she added.  “I have no doubt that the teachers and other adults at Sandy Hook Elementary, who practiced their emergency responses before the shooting, protected many, many children from being victims during the shooting. Those stories will be revealed over time.”

San Diego County Behavioral Health Services director Alfredo Aguirre issued a statement today advising parents that incidents such as today’s shooting “can generate a lot of fear and anxiety that can last a few days or weeks. That’s why it’s important for parents to be aware of their children’s response and be ready to talk openly about it, without providing too many details.”  He also suggests controlling the amount of information that young children can access about the tragedy.

State Superintendent of Public Instruction Tom Torlakson called the Connecticut shooting a “terrible, senseless tragedy. Our grief is made all the deeper when we think of the innocence of the lives lost and the valiant efforts of teachers and school leaders to protect them.”

The shooter in Connecticut has been identified as Adam Lanza, 20.  Lanza apparently first killed his mother, a teacher, in the family home before donning body armor and taking multiple guns to the campus. There he shot and killed six adults, including the principal and school psychologist, as well as 20 young students before taking his own life.

The massacre is the second worst school shooting in U.S. history, second only to the Columbine, Colorado tragedy that left 32 people dead.  It has renewed calls for gun control nationwide, although in this instance, the guns were purchased legally and registered to Lanza’s mother, police have indicated.

Lanza had been an honor student, but he also had a dark side. Some described him as a “deeply disturbed kid” and police have indicated he may have had a personality disorder. It has not yet been disclosed where Lanza may have been under care of a mental health services professional, or whether he was taking any psychiatric drugs which would have affected his mental state.

“I know there’s not a parent in America who doesn’t feel the same overwhelming grief that I do,” said the President, fighting down tears. ”As a country, we have been through this too many times. Whether it’s an elementary school in Newtown, or a shopping mall in Oregon, or a temple in Wisconsin, or a movie theater in Aurora, or a street corner in Chicago -- these neighborhoods are our neighborhoods, and these children are our children.”

He also promised to take action to stop such senseless killings in the future. “We're going to have to come together and take meaningful action to prevent more tragedies like this, regardless of the politics,” the President concluded. “This evening, Michelle and I will do what I know every parent in America will do, which is hug our children a little tighter and we’ll tell them that we love them, and we’ll remind each other how deeply we love one another. But there are families in Connecticut who cannot do that tonight. And they need all of us right now. In the hard days to come, that community needs us to be at our best as Americans. And I will do everything in my power as President to help.”

“If no laws were broken, a determination must be made to pass new laws that could have prevented this shooter from killing innocent children,” Zumwalt reflected, adding that all levels of government have an obligation to protect children’s safety.

“This is the duty of government,” the Granite Hills shooting survivor concluded.”Therefore we all need to work together—with the singular purpose of protecting our children and all citizens from these horrific acts, and reestablishing safety in all communities.”