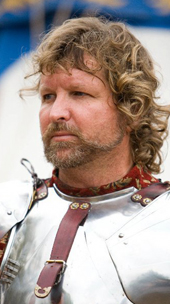 October 18, 2013 (Ramona) – At the Tournament of the Phoenix in Poway this weekend, Ramona resident Jeffrey Hedgecock is one of six competitors from around the world vying for glory in a global jousting competition.  These armored competitors joust with real weapons—unlike the mock battles at Renaissance fairs.  The action takes place October 18-20 at the Poway Rodeo Grounds.

“This is an honest competition, a true competition. It’s not staged; it’s not fake,” noted Hedgecock, who makes his living as an armor maker and has won several international competitions, most recently in France.  The  Tournament features medieval sporting competitions as well as a living history encampment, vendors, food and more.

“I had an interest in armor since I was a kid,” the Ramona man said.  He first became fascinated with medieval pursuits while writing a school report at age nine.  After getting a degree in art, he opened an armor-making business which he still operates today. He also became involved in historical reenactments.

“Any time you get into historical reenactment from the Middle Ages and you wear armor, you  kind of think ` I really want to joust,’” Hedgecock told ECM.  “You want to be a knight.”

Hedgecock founded Historic Enterprises and World Joust Tournaments.  In 2007, he organized a worldwide competition at the Poway Rodeo grounds –never imagining that the Witch Creek Fire would burn through his home town and into central San Diego that October.

“We were evacuated,” Hedgecock said. Practice sessions for the tournament were cancelled, but it was too late to call off competitors who had flown in from England, Belgium and New Zealand.

“We were at the Lakeside evacuation center,” he recalled. “We decided to go ahead with it even though we only one day of preparation.”

The next year, in memory of the wildfire, the tournament had a new name. “We had risen , Phoenix-like, from the ashes,” he said.

The Tournament of the Phoenix was born.

The first tournament drew 750 competitors.  Today, the tournament attracts thousands over the weekend.   The jousting features six of the most skilled knightly competitors from around the world on the jousting field.  Audiences can cheer on competitors or even obtain seats on the field of combat.

In addition to jousting, there are also competitions in pollax ground combat  and on Sunday,  club competition on horseback.

“We get out there and beat each other with clubs similar to a medieval mace,” Hedgecock says of the latter.

Asked how dangerous these sports are for participants, he replied, “Our armor protects us very well and even though it is dangerous, we take appropriate precautions.”  Still, minor injuries have occurred. 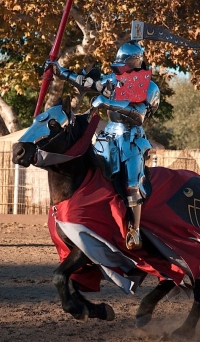 Asked what prompted him to engage in live jousting, he explained, ““I didn’t like what I saw at Renaissance Fairs. So went to England.”  There he saw jousting at the Royal Armory Museum at Leeds.  “Four months later I was competing there.”

Competitors are chosen for the attitude, competitive abilities and appearances.  “They all have an extremely knightly attitude,” Hedgecock added. “You have to trust each other in a very dangerous sport.”

The Festival of History surrounds the Tournament of the Phoenix.   “This is a collection of the best reenactment and living history groups in Southern California,” said Hedgecock. “ They do lifesetyle reenactments. You get a real feeling of what it’s like to live in medieval times from Rome to the Renaissance.”

Although these medieval sports are derived from a European tradition, Hedgecock’s efforts have led to a Renaissance of interest in the knightly pursuits here in America.

“We would like to think that we’re being an inspiration ot other people who want to do this, especially in this country,” he concluded.

For more information on international jousting and Tournament of the Phoenix, visit these websites: