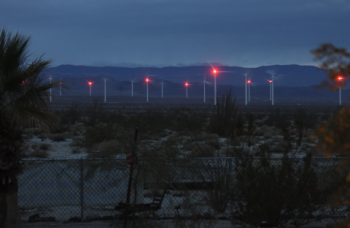 October 25, 2013 (Ocotillo) – Wind turbines in Ocotillo went offline on October 21 for several days due to SDG&E maintenance on Sunrise Powerlink, according to Matt Dallas with Pattern Energy .  Flashing red lights on the turbines that normally warn aircraft of the 500-foot-tall structures have also been dark, raising questions of safety for pilots at the site near the Borrego airport.

“The turbine lights do not operate when the project is offline. The FAA (Federal Aviation Administration) was notified as required,” Dallas told ECM.  But there is more to the story.

Ian Gregor, public affairs manager for the FAA, told ECM, “FAA guidance calls for lights and markings on tall structures, regardless of whether they are in use or not.  The issue is the structure, not whether it is currently in use for a particular purpose.”

However, the FDAA has no power to enforce these safety standards, since the guidelines are not mandatory.  “We do not have the legal authority to require lighting on tall structures,” Gregor advised.

So what happens if a plane or helicopter flies toward the more than 100 unlit towering turbines at the Octillo Express Wind Facility?

“If the company alerted the FAA, we would issue a Notice to Airmen alerting pilots that there’s an unlit tall structure in the area,” said Gregor.

The lights have been points of contention between Ocotillo residents and Pattern Energy.   In the project’s environmental documents on which federal approval was based, Pattern stated that light pollution would not be a problem.  However, residents have complained about bright red lights on every turbine, flashing on and off all night long. The lights shine directly into windows of some homes, disrupting sleep and the peaceful desert nights that drew residents to this area, homeowners say.

Pattern has claimed that the red lights were installed to meet FAA safety requirements.

But if the lighting guidelines are only voluntary, Pattern could reduce some of the lighting and provide a respite to weary residents, if the company were willing.

Why did Pattern choose to install lights that annoy residents and disrupt the desert nights on every turbine when the FAA does not require such elaborate lighting arrays?  And why has Pattern made no arrangements for lights on sensors or batteries to illuminate key towers  when the power goes out?

Why? Good question, Miriam. My guess?--that's the way the turbines are designed and manufactured, and Pattern just put 'em up "according to the instructions" because they really don't care.