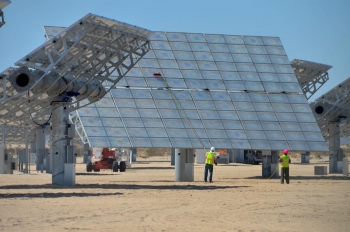 Public Comments Due by February 17

At the Boulevard Planning Group meeting, County employees made a brief presentation of the EIR.  The small community room was packed with over two dozen residents of Boulevard, all expressing major concerns with the proposed projects. Robert Hingtgen and Mindy Fogg from the County’s Planning and Development Services discussed Soitec’s four proposed projects, which combined would encompass a total of 1,490 acres in Boulevard, with almost 7,500 solar trackers, each measuring 30 feet tall by 48 feet wide.

The four sites included in the existing plan are:

Donna Tisdale, Chair of the Boulevard Planning Group, noted that Boulevard is a disproportionately impacted low-income rural community. According to Tisdale, residents in the community have raised the following concerns:

“No other community is facing this level of unwelcome and unjust conversion,” said Tisdale.  Boulevard has also been targeted for major wind energy projects and additional industrial solar facilities.

Boulevard residents in attendance at the January 2 meeting were vocal about perceived impacts to their properties, quality of life, health and safety. Many expressed frustration about potential ground water issues, interference with wells, and loss of property values. Industrial solar projects require large amounts of water to rinse and clean the panels--water that is a precious lifeblood in rural communities such as Boulevard.

Kelly Fuller, a consultant  with the Protect our Communities Foundation (http://protectourcommunities.org ), brought up the issue of wildlife impacts, specifically the Golden Eagle. Fuller is former Wind Campaign Coordinator at American Bird Conservancy in Washington, D.C. She asked if the County had used any other data other than that of David Bittner’s golden eagle report. Bittner was convicted in federal court and discredited early last year for illegally tracking and providing questionable golden eagle data to energy clients in which his firm profited by more than $600,000. (http://www.justice.gov/usao/cas/press/2013/cas13-0813-BittnerSentPR.pdf and http://eastcountymagazine.org/node/13772

When Fuller asked the County representatives if they are basing impacts to Golden Eagles on any other data, Fogg stated that they are only using the Bittner data right now, but are open to any other reports that would be available.

Fuller said, “so, we don’t really know the potential impacts on the Golden Eagle?”

According to the United States Attorney, Southern District Of California, (http://www.justice.gov/usao/cas/press/2013/cas13-0418-BittnerPR.pdf ): “…Golden Eagle populations are primarily impacted by habitat loss, collisions with transmission lines and increasingly with wind turbines, ingestion of lead and other contaminants, and disturbance of nest and brooding sites.”

Another issue brought up was the County’s lack of a policy restricting conflict of interest. Tisdale noted that the original project manager, Patrick Brown, left the County and went right to work with Soitec. County representatives said there was no policy prohibiting this.

Concerns with loss of constitutional rights through judicial fast-tracking certification under AB900 were also raised. Tisdale questioned staff about a court decision that ruled a section of AB 900 as unconstitutional (http://www.courthousenews.com/2013/04/03/56350.htm). The California Environmental Quality Act (CEQA) requires state and local agencies to analyze a project's potential environmental impacts and identify a range of feasible alternatives and mitigation measures to minimize harm. AB 900 shortened the list of topics subject to review and limited analysis to the project level, but was declared unconstitutional last April. The Soitec project has not met CEQA requirements.

All community input is due to be submitted before 4 p.m. on February 17.

A more detailed presentation by the County and representatives from Soitec will be presented at the next Boulevard Planning Group meeting on February 6th.

Office of Planning and Research has already received Tierra del Sol Solar Farm application and Notice of Preparation.
This has been in the works for some time now.

Even more East County land scheduled for destruction. Where is the Sierra Club? Where are all the local activists who've spoken out so forcefully on behalf of our state and national parks? Where is the (rest of) the press?