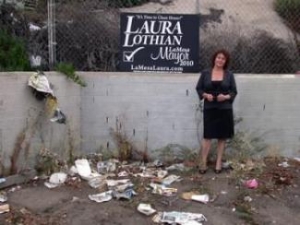 October 21, 2010 (La Mesa) -- La Mesa Mayoral challenger Laura Lothian generated headlines yesterday when her campaign was seen piling trash and draping it over a wall so she could pose in the midst of the trash, smiling proudly with a campaign sign for a photo shoot.

Unfortunately for Lothian, Michele Tackett, manager of Jason’s Auto Garage in the old McClellan Buick location, was not pleased with the behavior she said she witnessed, and felt compelled to write to the Mayor. Before the evening was through, the story was picked up by the Union Tribune, La Mesa Today and the La Mesa Patch, where despite Lothian's explanation that the trash was already there, numerous readers hammered Lothian in the reader comments for not picking it up.

As of Tuesday evening, Lothian’s campaign home page was devoted to a hit piece in which the photos appear. The caption under the photo blames trash for attracting crime and states, “this eye sore is a glaring symptom Art Madrid is so complacent in his five terms as mayor, he either doesn't see this when he drives past or he doesn't care.” A link to a slide show goes on to accuse the Mayor of being “irresponsible at best and immoral at worst.”

Tackett, who told the Union Tribune she has never met either Lothian or Madrid, was upset to see Lothian’s crew “make the matter appear even worse than they are,” and wrote that their new business has “had many neighbors from the community drop in not for service but just to thank us for ‘The face lift’ the clean lot and fresh paint has brought to the neighborhood.”

“She had them film her for several minutes and then jumped into her BMW and drove away” Tackett wrote, adding, “ If this was her way of showing how she cares for this community she failed miserably. Her and those two men could have spent maybe an extra 3 minutes and truly made a difference by disposing the trash instead of kicking it around into heaps for filming.”

The news articles have generated more than forty reader comments, the majority agreeing with Tackett, and not always in as charitable a tone. The Mayor visited Tackett the next morning to apologize for the incident and was quoted in the Union-Tribune promising to return with volunteers to clean it up, however by mid-morning Lothian had taken the hint and picked up the lot.

Former La Mesa City Councilman, Barry Jantz, a political campaigner since his college days, has written a Campaign Advice Countdown for the last month for the conservative blog FlashReport. In his Your 12 Days Out Campaign Advice this morning, Jantz referenced the Lothian Incident, writing:

My advise today is simple. As a public official -- or as a "public" candidate -- anything you do outside the confines of your own home will be seen by someone.

Whether you do it...well, you might consider measuring that not by whether you think you can get away with it, but instead by if you want to see a story about it in the newspaper.

Actually, you know, you could also measure whether to do it by asking yourself if it's right or wrong.

Ultimately, voter perception will decide whether dirty politicking pays off in this race.

Update October 22, 2010 -- Lothian has flatly denied allegations.“I never piled up trash.  I did not import trash nor did I move trash from one spot to another…There was no stunt there,” she told ECM. She provided undated photos to La Mesa Patch here, which she says show the trash was there before the photo shoot.  The satellite photos she provided are undated, however, leaving questions unresolved.