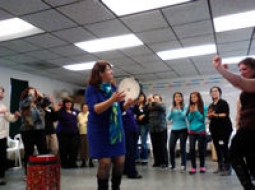 Refugee Women Find Healing and Unity Through Drumming in El Cajon
By Nikki Lyn Pugh, MFA
In a large room in El Cajon, 43 women sit in a circle. Many smile and nod as they listen to the petite woman who is speaking in the center. The speaker is Christine Stevens, founder of Upbeat Drum Circles, one of the facilitators of the event that day. Christine holds a large drum in her hands as she addresses the women around her. On the skin of the drum is an image of a woman.  Her delicately- painted face is framed in a thin, light blue scarf.

Laughter erupts. A group of young women in the corner of the room look at each other and giggle. For them and many others, today marks their first participation in a drum circle.
“All of us learned the drum from our mother’s heartbeat. Women were the first drummers. This is our history as women― drumming together.”
A moment of silence follows as the women take in what Stevens has said.  Then she goes on to explain that for the day’s event, there are two goals―personal empowerment and collective unity.
“You all come from different groups and you don’t know each other yet,” she continues. “Take a minute now and look around the circle. At the end of the day, I am going to ask you to do this same thing and let’s see if you feel different. Music brings us together.”
Healing the Woman and the Community
The Wellness and Leadership Training for Refugee Women program, organized by Upbeat Drum Circles, Musical Missions of Peace and the El Cajon-based refugee organization License to Freedom, is about creating cultural union for its diverse participants. It is also about personal healing on an emotional, spiritual and even physical level.
The majority of the women present at the January 16th inaugural event come from Iraq. Some fled the country to seek refuge in the United States in the 1990’s, as a result of Saddam Hussein’s bombing of Kurdistan as well as the First and Second Gulf wars.  Another major wave of immigrants came to East County San Diego in 2007, as a result of the sectarian violence that has increased in that country, and especially in the urban centers such as Baghdad, since US occupation in 2003. There are currently about 50,000 Iraqi refugees living in El Cajon alone.
Iraq is not the only culture represented at the workshop this day, however.  Present are women from Iran, Lebanon, Afghanistan, Indonesia and Nicaragua. They are of Muslim, Christian and Bahá’í faiths, just to name a few, and they speak a myriad of languages. The event provides a vehicle for these women to share the traditions of their home countries through the universal language of music. It also gives them a chance to bond together through their common experience as immigrants and as women. All of the workshop participants come from situations of war and unrest in their home countries. And all of them, along with their families, are going through a new kind of stress as they learn to function in a culture that is vastly different from their own.
“I see the unity here. Everybody is starting to build networks, relationships and trust,” says event organizer Dilkhwaz Ahmed, M.S., executive director of License to Freedom, who came to the United States as a refugee herself in 2002. She has been drumming for a year and facilitates small drumming circles of both men and women through her organization. She has seen the difference the circles have made for her members, and also for herself. 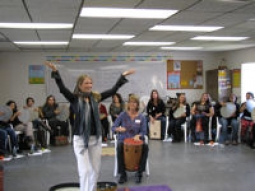 “When I drum, I feel that my immune system is very strong. I feel better. My digestive system works better. I feel like I am valuable person and am doing something for me.”
“If we can heal ourselves first, then we can help heal our families and our communities,” says Kristina Sophia, a musician, singer and sound healer who, along with her husband Cameron Powers, is the founder of Musical Missions of Peace, an organization aimed at creating peace worldwide through music.
“When we are sad,” she says, addressing the circle, “we can take the emotion inside us and sing it out and drum it out so it cleanses our souls!”
And that is just what the women aim to do next. As the large circle breaks up into five smaller ones, everyone is given a drum and some basic instruction. Drumbeats, singing, laughing and the sound of stomping feet penetrate the hall, suddenly transporting it into not just a workshop, but a celebration.
Drumming Helps the Body, Mind and Spirit
“Our philosophy is that the stress goes down when the music comes up,” says Stevens, whose pioneering new book on the subject, Music Medicine, will be released this June from Sounds True.  “There is scientific research that says our bodies change and our immune system gets stronger when we play music together. That scientific change does not happen when just listening to music.”
Indeed, according to well-known neurologist, medical pioneer, author and speaker Dr. Barry Bittman of the Pennsylvania-based Mind-Body Wellness Center, music-making, including drumming, can affect us on a biological as well as psycho-social level and can help to reduce stress even on the DNA level. In a recent study, he discovered that there was a correlation between drumming and an increased activity of so-called Natural Killer cells, “specialized white blood cells that seek out and destroy cancer cells and virally-infected cells (Alternative Therapies, Jan 2001).”  These days, drumming is becoming an accepted healing modality for cancer, diabetes and cardiovascular disease patients, as well as people who have conditions such as Post Traumatic Stress Disorder (PTSD).
Delene is a vibrant 26-year-old college student in Social Work at SDSU. Not long after she came to the country, she was diagnosed with PTSD. This is her first experience in a drum circle.
“I found out that I have PTSD at a young age,” she says. “It affects my personal life, my work and my school. I have memory loss but sometimes memories come back. It does affect me. I am so emotional and sensitive.”
During the bombing of Kurdistan by the Hussein government in the early 1990’s, Delene and her family fled to the mountains surrounding the area where they lived. In the ensuing chaos, her mother was injured and suffered a miscarriage. Then one of her brothers died of starvation as the family hid in the mountains. After the crisis was over, the family returned to Kurdistan only to flee again four years later. Her father worked as a security guard in Kurdistan for the US Army and the family was seen as a threat.  In 1996, they came to the United States.
As the deep sound of a bass drum resonates from the inside the hall, Delene talks about what this day of drumming has meant to her.
“While we were drumming, I was thinking of my mom. I was telling my friend that I wish our moms were here to drum too. It is a wonderful opportunity to come together….It is just different cultures laughing, eating and sharing. It is true―music does bring people together.”
Because of the overwhelmingly positive response of the January 16th workshop, the Wellness and Leadership Training for Refugee Women program would like to hold more events―and they need your help! The second Women’s Healing Circle will be held on March 3, 2012 in El Cajon. Just one $50 donation can purchase drums for two women. Plans are also underway for the creation of an Intercultural Music Center in East County San Diego. For more information and to donate to these efforts, please contact Musical Missions of Peace at 303-618-6404 or visit www.musicalmissionsofpeace.org. Help create healing and peace through music!
--------------- ------------------ -------------------- ------------
Writer Bio) – Nikki Lyn Pugh, MFA was a 2011 Peace Writer with the USD Joan B. Kroc Institute of Peace and Justice Women’s Peace Maker Program. For more information, visit www.playfulpenwriting.com