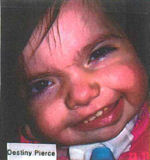 The child was life-flighted to a hospital, she said, adding, “In her father’s arms, Destiny took her last breath of life…An angel on Earth was called home to be her daddy’s angel in Heaven.”

The 3-year-old girl was born with organs on the wrong side of her body.  She defied doctors’ predictions that she would not survive 24 hours after birth, rallying after two heart surgeries. Her plighted inspired the Jacumba community to rally around the family, as ECM previously reported.
Community members raised nearly $2,000 to help Destiny’s father, Anthony Pierce, afford a car to drive his daughter to her medical appointments.  The drive continues with a new goal: covering funeral costs.  “We in the backcountry are doing all that we can to bring continued hope to Anthony, along with a ray of sunshine,” Ostrander concluded.