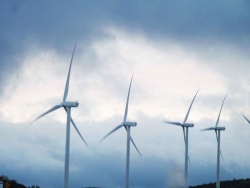 The meeting will be held at 5201 Ruffin Road.  If approved, the proposal would subsequently be heard by the Board of Supervisors at a future date. 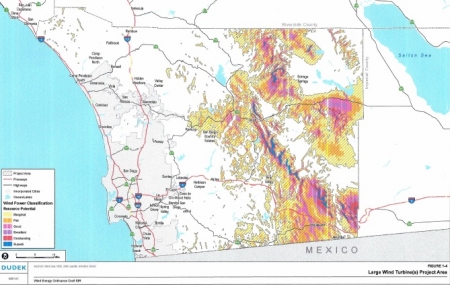 Vast tracts of land in East County, including many mountain, rural and desert areas, could be opened up for wind energy development if the proposal is approved, including scenic areas such as the Julian region.

The proposal would also include a General Plan Amendment to modify the Boulevard Community Plan to allow more large wind projects, while conversely changing the Borrego Springs Community Plan to provide protection of scenic views.

Several alternatives will also be considered.

But Donna Tisdale, Chair of the Boulevard Planning Group, voiced outrage.  “Regardless of whether the Planning commission approves the proposed project for over 800,000 acres in County jurisdiction or a reduced project with still over 400,000 acres, it’s over incredibly destructive,” she told ECM. “It’s unconscionable.” She questioned why County planners would sanction destruction of views in Boulevard, while protecting them in Borrego.

Tisdale said that any county resident living within a designated wind resource area would have to disclose that fact when they sell their home, negatively impacting property values for homes near sites that could become industrialized wind facilities with turbines 450 feet tall or more.

Tisdale fears cumulative impacts of multiple wind projects slated or proposed for county, state, federal and tribal lands near her community.  Those impacts may include harm to human health such as tinnitus (ringing in the ears), headaches and heart problems found in residents near wind turbines, death of birds including eagles and destruction of habitat for other wildlife, fire dangers, noise, safety hazards (blades have been known to hurl off, scattering heavy debris up to a mile) and visual blight.

Advocates say renewable energy from wind projects is needed to reduce global warming.  Enel Green Power, which owns Padoma Wind Power, a company planning a wind project in the Boulevard area, notes in comments submitted on the proposed ordinance, “Not only will clean power improve quality of life by reducing air pollution and creating green jobs, it will help meet the State of California’s aggressive RPS goals and targets for cutting greenhouse gas emissions.”

But  the wind industry fails to note that there are other viable options for reducing greenhouse gases without the destructive environmental, health and safety issues posed by industrial-scale turbines.

The California Public Utilities fourth quarter report in 2011 on the state’s progress toward meeting renewable power goals contains a surprising finding.  In the Bay Area, where PG&E purchases solar from PV including homeowners and businesses with rooftop installations, the cost per megawatt to buy power from solar PV is actually LESS than the cost of purchasing wind energy.

The 2011 contract price for PG&e to buy wind was $118/megawatt-hour (MWh).   By contrast, the cost to buy solar PV sized at 3-20 MW was just $114/MWh.  Solar has dropped sharply in price in recent months due to innovations in technology, thus the gap may well continue to widen in the future, making solar from small-scale owners a more economically viable option than either  industrial-scale wind or desert solar—and without the potential hidden costs in health, safety, and environmental damage, diminished property values, or heightened fire risks associated with the industrial-scale projects.

To learn more about the County’s proposed wind ordinance, see these links:

What a cruel travesty: hundreds of thousands of beautiful wilderness acres destroyed--gone forever--in order to meet arbitrary carbon reduction limits that, in the end, won't make a godd*mn bit of difference.

Where's the Sierra Club, and other so-called champions of the environment? We know that if this were a private developer proposing sub-divisions and shopping malls in the same area, they'd be challenging them in court and shouting their pro-nature, anti-business slogans from the mountain tops. In this case, however, their silence is deafening. Have they really swallowed the green energy bullsh*t, too? Or are they just unwilling to offend their allies in the Obama administration?

They acknowledge these types of problems and throw themselves into the process. They do this because it is very helpful in getting donations. Then behind closed doors, like crooked union bosses, betray their members.

Through mandatory enforcement against the turbine makers, as have many other wildlife and enviornmental groups, but Audobon is still only for voluntary rules set by the industry itself.

Sierra Club is not yet opposing wind development overall, but has at least recognized the bird kills are a huge problem.

They need to hear that people all over the county are concerned about this.

Love to. Thanks, Miriam. Do you have any mtg. details?

The damage done by this project will be immense and it must be stopped. The beautiful, fragile ecosystem, human health, and property must not be sacrificed for an ugly, dangerous wind energy project. We do not need this in our county. It is appalling what the Obama administration has done in just 3 years to expose Americans to electrosmog (electrosmog includes electromagnetic radiation and EMF's) from smart meters and wind projects, and to other toxins from fracking. What hypocrisy the so-called environmental groups show by their silence or collusion.