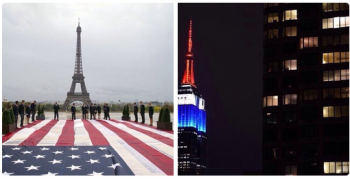 ISIS, or the Islamic State, claimed responsibility for Saturday’s attacks, calling them the “first of the storm,” according to a New York Times article.  ISIS indicated the attacks were retaliation for French forces supporting a U.S.-led coalition against ISIS in Syria and Iraq.  Meanwhile, people around the world have taken to social media to show solidarity with France.