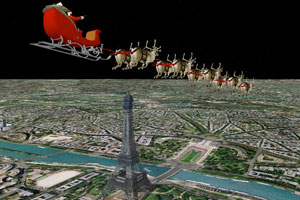 December 23, 2009 (North Pole) – For more than 50 years, the North American Aerospace Defense Command (NORAD) and its predecessor, the Continental Air Defense Command (CONAD), have tracked Santa’s Christmas Eve flight. Starting before dawn on December 24, you and your children can log on at http://www.noradsanta.org/ to watch videos via “Santa Cams” tracking Santa’s journey around the world to homes of all children who believe in him.

There are also games and activities direct from Santa’s North Pole village to delight youngsters and the young at heart in a special “Kids Countdown section.”

The tradition of the federal agency tracking Santa began in 1955, after a Sears and Roebuck ad in Colorado printed an incorrect phone number in an ad. Instead of reaching Santa, the phone number put children in touch with the CONAD commander-in-chief’s operations hotline. The director of operations at that time, Colonel Harry Shoup (photos, right), had his staff check radar and began giving children updates on Santa’s location.

Although Colonel Shoup passed away in March, the tradition he started lives on. Today, NORAD also tracks Santa via satellites, fighter jets, Santa cams and radar known as the North Warning System, providing images of Santa and his reindeer-drawn sleigh--and frequently, Santa waving to pilots passing by. The website provides updates in several languages.

In addition, NORAD volunteers tirelessly answer Christmas Eve calls and e-mails from children around the world. You can e-mail NORAD at noradtrackssanta@gmail.com for a Christmas Eve update on Santa’s location, or call 1 877 HI-NORAD (1 877 446-6723).

Yes, Virginia, there is a Santa Claus, NORAD assures skeptics. “Mountains of historical data and over 50 years of NORAD tracking information leads us to believe that Santa Claus is alive and well in the hearts of people throughout the world,” the NORAD site concludes. But the Santa tracking experts caution, “If children are still awake when Santa arrives, he moves on to other houses. He returns later…but only when the children are asleep!”