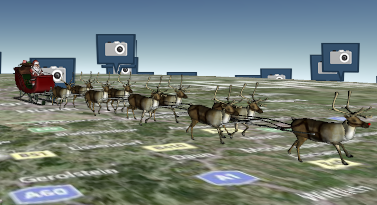 December 24, 2013 (North Pole) – Children and the young at heart can  track Santa’s flight across the globe today and tonight at www.noradsanta.com.  The North American Aerospace Defense Command (NORAD) tradition dates back to 1955, when a Sears store’s holiday ad had a misprint, directing callers to Santa instead to  an agency that was NORAD’s predecessor.  Colonel Harry Shoup had his staff provide radar locations for Santa making his way south from the North Pole.

This year’s site includes videos, games, Santa’s village, holiday songs and more.  Clicking any location on the interactive map brings up photos and details of every city shown on the site, which also tracks number of packages delivered and more.  Start tracking Santa here: http://www.noradsanta.org/

February 16, 2013 (San Diego)--It’s like TV’s Amazing Race to help Santee Santas! Teams of two make their way around Balboa Park solving cryptic clues and completing challenges. At the end of the race, everyone meets up at the finish line where teams are awarded prizes, receive free refreshments and re-hash the day’s exciting events.

December 24, 2012 (Colorado Springs)--For over 50 years, NORAD and its predecessor, the North American Aerospace Defense Command (NORAD) and its predecessor, Continental Air Defense Command (CONAD) have tracked Santa's flight. You and your children can log on at www.noradsanta.com for live updates on Santa's trip around the world, including videos and Christmas activities for young and the young at heart.

The tradition began in 1955 after a Colorado Springs-based Sears Roebuck & Co. ad misprinted the phone number for children to call Santa. Instead of reaching Santa, kids reached to the CONAD Commander-in-Chief's operations "hotline." The Director of Operations, Colonel Harry Shoup, had his staff check radar for indications of Santa's flight south from the North Pole. Children who called were given location updates, and a tradition was born. 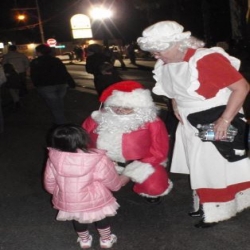 November 29, 2012 (Lakeside) – Lakeside Chamber of Commerce’s 14th Annual Spirit of Christmas on Maine Ave. is December 1 from 4 p.m. to 9 p.m.  The lighting of the community Christmas tree will highlight the event.  Santa will be in attendance for photo opportunities as well. 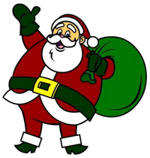 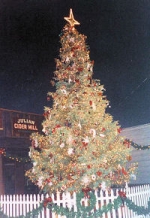 November 19, 2001 (Julian) -- Julian celebrates the holiday season by illuminating the town's enormous living Christmas tree--and paying homage to the individuals who contribute time and energy to making Julian what many consider the best small town in Southern California.
The tree lighting will take place in Julian’s Pioneer Park on the Saturday after Thanksgiving, marking the  beginning of the annual Julian Country Christmas celebration--three weeks of holiday festivity during which visitors and residents can capture the spirit of the season in an old fashioned way.

December 20, 2010 (Alpine) - Santa dropped into Alpine with a Blackhawk helicopter on Saturday, as these provided by Craig Linden at Kamps Propane reveal.  Gearing up for his round-the-world Christmas Eve flight, Santa paused for photos with local kids and their pets in an event that was truly the cat's meow! 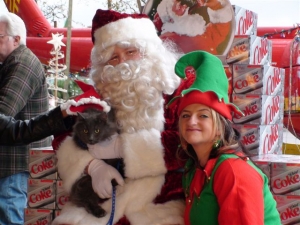 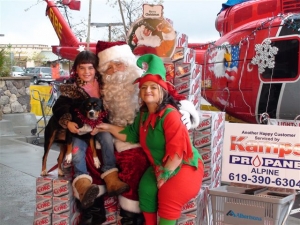