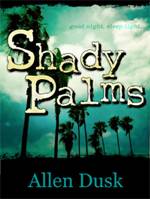 Participants must post photos of their bites to win

September 17, 2012 (San Diego) – To promote the release of his new novel Shady Palms in October, San Diego author Allen Dusk is holding a contest to give away signed copies of his book, set in El Cajon. Victims of bedbug attacks are encouraged to post photos of their bites on Twitter and Instagram with the hastag #ShadyPalms. On October 1, 2012 Allen will announce the winners on his website http://www.allendusk.com.

The Shady Palms is a sleazy motel, burrowed on the edge of El Cajon, which is haunted by rumors of dead hookers found between mattresses and peep holes drilled through walls. When Special Agent Daniels targets the motel during an investigation, the nefarious owner, Sanjay, must scramble to conceal evidence of his own dark deeds. Just when he believes things can't get any worse, motel guests begin to vanish without a trace. Can Sanjay discover the truth behind the phenomena threatening his motel before the Feds get suspicious, or does he risk exposing his own sordid enterprises to seek help from the outside?

Shady Palms goes on sale in October, in both paperback and eBook formats, and will be available through Amazon, Barnes & Noble, iTunes, and wherever fine books are sold. Mysterious Galaxy Bookstore in San Diego is scheduled to host a book signing for Shady Palms at 2:00pm on Saturday, October 20th, 2012.

Allen Dusk is an award-winning author of dark fiction and poetry. He lives in San Diego with his wife and daughter. Other than writing, his favorite pastimes include photography, geocaching, old horror movies, and supernatural folklore.