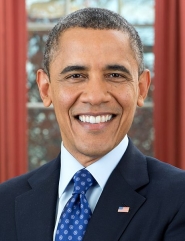 Obama urges journalists to cover substance of campaign, not insults
By Liz Alper
March 29, 2016 (Washington, D.C.) - On Monday, President Barack Obama criticized the media’s handling of the 2016 presidential campaign trail coverage, saying “a job well done is about more than just handing someone a microphone.”
Obama said that the 2016 campaign coverage had become "entirely untethered to reason and facts and analysis.  I was going to call it a carnival atmosphere, but that implies fun.”
In addition to the media, Obama put Republican presidential front runner Donald Trump, saying his attacks on women and racial minorities were full of "divisive and often vulgar rhetoric."
Obama also feels that the news media has not done enough to question the promises made by the candidates, which includes not only Trump, but Democratic candidate Bernie Sanders.  “When people put their faith into someone who can’t possibly deliver his or her own promises," Obama said. “that only breeds more cynicism.”
At a journalism awards ceremony that included an audience of newspaper proprietors, editors and reporters, the president said that despite shrinking newsrooms and profit margins, they should focus a majority of the money they do have into investigative journalism.  He warned them to avoid "slapdash" tweets on Twitter that disappear instantly in favor of in-depth coverage of issues.
“Just because something is substantive doesn’t mean it is not interesting,” Obama asserted.
Obama has mentioned the "coarse" tone of the campaign before, but never rarely has he shared his views on what he calls the "unmet promise of the media world."

Obama acknowledged that he has butted heads with media several times during his time as president, singling out an article written by Jeffrey Goldberg, national correspondent with The Atlantic magazine.  The article was about Obama's foreign policy and sent shockwaves around the world.

Mr. Hope & Change: "Obama also feels that the news media has not done enough to question the promises made by the candidates."....hahahahaha