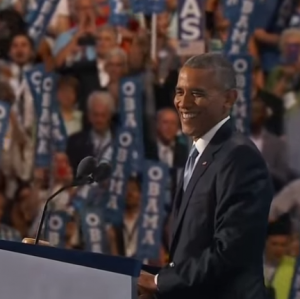 “I’m asking you to join me – to reject cynicism, reject fear, to summon what’s best in us; to elect Hillary Clinton as the next President of the United States, and show the world we still believe in the promise of this great nation.”—President Barack Obama  (View video ; read full text.)

Other speakers included victims of gun violence, a  retired admiral and ex-CIA director

July 28, 2016 (Philadelphia) – President Barack Obama delivered a rousing speech to cap off day three of the Democratic National Convention, citing accomplishments of his administration, praising Hillary Clinton as the most qualified candidate for the presidency, and criticizing Republican nominee Donald Trump as unqualified, lacking plans to solve America’s problems, and a dangerous demagogue who would jeopardize international relations and national security.